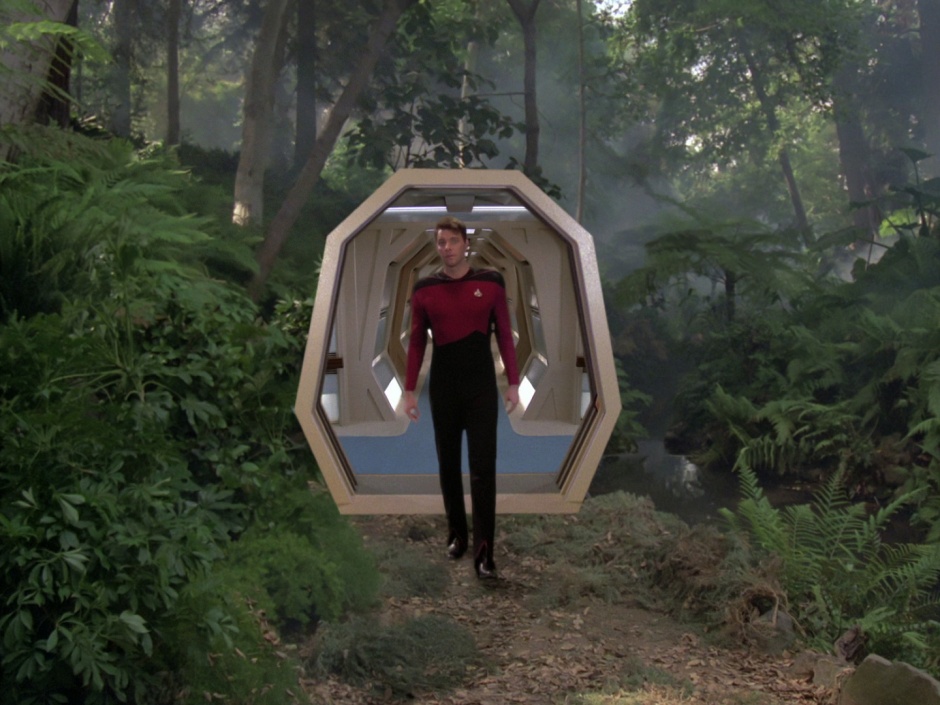 I was watching Star Trek with Dr. James the other day, and the episode happened to be one of those centering on the holodeck technology. Specifically, it was the Voyager episode “Heroes and Demons” which involves holonovel characters, a photonic alien, and the ship’s EMH venturing out of sickbay for the first time. It’s not the most dramatic episode but it led me to explain to Dr. James (she’s just getting into the series) all about holodecks and how they’ve been explored in Star Trek in the past. After the conversation my mind naturally drifted to holodecks in Star Trek Adventures where there’s a lot of awesome potential.

A past version of Star Trek RPG had the definitive book on using the holodeck in your game: Holodeck Adventures for the Star Trek: The Next Generation Role Playing Game by Last Unicorn Games. Two thirds of the book is taken up by three holodeck-centered scenarios (including one with some heavy Lovecraftian channeling) and those are excellent potential conversions to STA. What I want to focus on here, though, is what’s covered in the remaining third of that book: how players and GMs use the holodeck to advance the story and deepen characters.

I’m not going to try and review all the “technical aspects” of the holodeck, partially because there are so many other places you can get that stuff and partially because it boggles the mind that this could seem in any way feasible. Don’t think about that part too much, it’s just a fun diversion to keep your characters from going space-crazy and it’s occasionally a source for scientific or investigative work and the odd life-threatening accident. In a nutshell, the holodeck is a complicated reverse-transporter which takes energy and makes matter out of it then destroys it to keep making new scenes, characters, and objects. Real people go in and, through the use of force fields, holograms, and sound-manipulation are convinced that they are in a landscape talking to people which is all just a technological illusion. You can visit majestic scenes, play through “holonovels” like an RPG-within-an-RPG, and also create the necessary scenes for ceremonies or brainstorming.

Players and the Holodeck

Holodecks are a way for your character to explore their past times, whether it’s poker with famous people or kayaking through rapids they can have hobbies that don’t involve the ship or their assignments. They can also attempt some creative expression by creating holonovels and creative programs of their own, even if it’s an exercise or combat program. You can think of your character’s holoprograms like someone’s iTunes playlist: it might not be a life-defining character aspect but if you want an insight into the inner workings of your character and what they project to other people it’s hard to come up with something more personal.

If you want something more mechanical, consider adding these Talents to your Star Trek Adventures game.

Holographic Programming and Holodeck Technology would make excellent Focuses for a character with an interest in holodecks. Someone really obsessed (like Lt. Barclay) might even include it as one of their Values, but the overall utility of that makes it not the best plan. Equipment in Star Trek Adventures is pretty freeform so you can feel free to come up with a whole list of holoprograms that your character has stored. In the midst of the action, your GM might require an Opportunity cost to get them (if they would be just remarkably useful) but holoprograms are never purposefully dangerous so probably avoid Escalation cost.

GMs and the Holodeck

There are two main ways to include holodecks as a major part of a mission’s plot: scene-setting or malfunction. As designed, the holodeck is a recreational release for the crew capable of generating an infinite number of diversions. As a scene-setting plot element it can create background elements for other plots but it can also be the focus when the crew is constructing or investigating something using the holodeck (the trial episode “A Matter of Perspective”), as one half of a split episode (like in the TNG episode “11001001”), or even humorous episodes. It’s a bit meta but you can have your characters acting out their parts in a Dixon Hill noir holonovel or a chapter of The Adventures of Captain Proton and there doesn’t have to be anything going wrong: the player characters and the players are both invested because its fun.

On the other hand, most of the time the holodeck appears on the show it’s because there’s a malfunction. Internal failures might prevent people from being able to leave the holodeck (like in “A Fistful of Datas” or “The Big Goodbye”) and usually there’s an issue with the safety protocols being turned off. The holodeck might also be coopted by alien entities (part of what happens in “11001001” and also what happens in “Heroes and Demons”) which doesn’t have to involve any technological issue at all. If there’s a real alien in a fake holodeck scene it would be very difficult to spot them without shutting the whole program down, as seen in “Bride of Chaotica!” An extreme example of this is the two-part Voyager episode “The Killing Game” where Hirogen take over the ship and force the crew to participate in war-game scenarios (with altered memories) for the satisfaction of the Hirogen hunters. The biggest malfunction, of course, is when the holodeck “accidentally” creates self-aware characters like Professor Moriarty or my own Kovar. This is a trope that gets easily overused, though.

Whether through normal use or malfunction, you want to think about what holoprograms the crew might be creating. Holonovels are a popular past time, which is pretty much just LARPing through your favorite stories. Crew members might even write their own holonovels to play through which gives an easy chance for a player to step into the GM seat for a bit. To create something memorable, just come up with the genre and use standard tropes so that players can focus on the technological aspects of it. Familiar stories like Beowulf, Sherlock Holmes, Lovecraft novels, or The Count of Monte Cristo will be easy enough to get into and it’s also easy to see how the player characters in the story are changing the plot. If you want to make your own stuff, a run-of-the-mill story with stock characters will be simple to jump into and no one will worry too much when it all goes off the rails because of alien technological parasites or something.

Player characters will need roles in the story, of course, so you should come up with some “main cast” roles and have the players pick some for their PCs. In a noir detective story, for example, you could have brief descriptions (one or two sentences) for the private eye, the long-suffering secretary, the criminal informant, and the plucky reporter. Each of the roles is taken by a player character and that’s the persona that the characters in the holonovel interact with. The PC will gain this role as a Trait (and possibly gain other Traits) which can be used to affect scenes as described on pages 279-280 of the Star Trek Adventures core book.