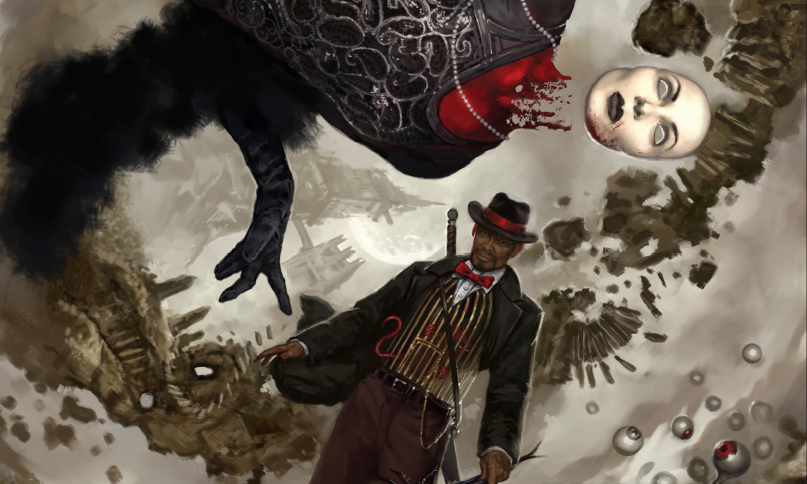 I’ve got a fun mental exercise for you looking at how to make new, surreal additions to your Invisible Sun campaign. Surrealism involves juxtaposing the irrational alongside the everyday so we’re going to do this with something very mundane: money.

To create surreal versions for Invisible Sun we’ll use the definition of currency according to an abbreviated version from the Encyclopedia Britannica: Currency consisting of government-issued paper money and coins, that does not require endorsement. Let’s go through this definition point by point to come up with an inverted take on currency that fits the surreal tone of Invisible Sun.

These coins aren’t government-issued, the government is issued to them. People in Tuxeng tend the land around their village, fostering growth and balancing the ecosystem while they live in harmony with spirits called the kesetrakanni. Found only around Tuxeng, no matter how the landscape changes, kesetrakanni are themselves birthed from the forest and appear as humanoid terrariums. Some in Satyrine speculate that they may be relatives of the lacuna while others dismiss this as superficial, but regardless of their origins the kesetrakanni are always feeling the ebb and flow of the web of life around them. Flowers, insects, vines, animals… all are nudged and watched by the kesetrakanni.

Through some magic of the Green, each kesetrakan is joined to a living reservoir of energy called the tunklah. For services or materials brought in which benefit the ecosystem, a kesetrakan is willing to imbue any natural object with some amount of tunklah as thanks and (because the kesetrakanni harmoniously agree on these gestures) the imbued tunklah carries with it a denomination like any other currency.

Over generations, a massive amount of tunklah-infused objects have built up and the government of Tuxeng uses them in place of money. There are limitations, of course, including that the currency has all different denominations and that the government can’t mint any new currency when they like. Still, it works well enough for the locals and with the Green Sun’s habit of swallowing up most outside things in short order it’s perhaps better in the long run.

The Color of Money Under the Silver Sun

What about a currency that’s not paper money or coins, in fact that’s not physical at all? In a corner of the Silver Sun people use colors as currency. Which colors? All of them.

Money in this part of the Actuality is denominated into twenty different exact shades of color and they are exchanged through intense gazes that convey the exact color-currency. The intensity grows as the money is collected in the mind but unspent colors can fade as memories become old, leading to a brisk economy in this area. There can also be challenges with combining colors and many pride themselves on the difficult art of imagining a combination of one color and the precise imagining of another color growing in intensity.

The real problem with the system, though, is counterfeit colors. Anyone can spot a color which can’t be seen, that’s amateur stuff, but some try to imagine colors with such precision that they can imagine intense hues of exact color hues. Some merchants will accept a rose hue and only later realize that it’s actually a carnation pink and they’ve been swindled, but most are craftier than that. However, telling a dusty rose apart from a spring rose or a forest green apart from a maple green takes a skilled mind. This is why the penalty for counterfeiting is unspeakable.

Ebentgeld from the Nightside of Indigo

What if a currency did require endorsement? This is the case for ebentgeld, a form of currency used in a populous region on the Nightside of Indigo. These dark grey coins come in various denominations but their faces normally remain blank. When used for purchases they have to be imbued with secrets to bring out their value, specifically two secrets.

To use a piece of ebentgeld you whisper a secret into the coin and you can see the value displayed on the face. When you hand it to the seller, they whisper a secret of their own and can likewise see the coin’s value. The secret can be anything, innocuous or existential, but it cannot be a secret known to any other being living or dead. Most people have a “coin-secret” that they keep to themselves and whisper it into their handful of coins when they need to make a purchase or receive payment.

More than one person has wondered what happens to the secrets whispered into the ebentgeld coins but so far they remain the currency of the land.