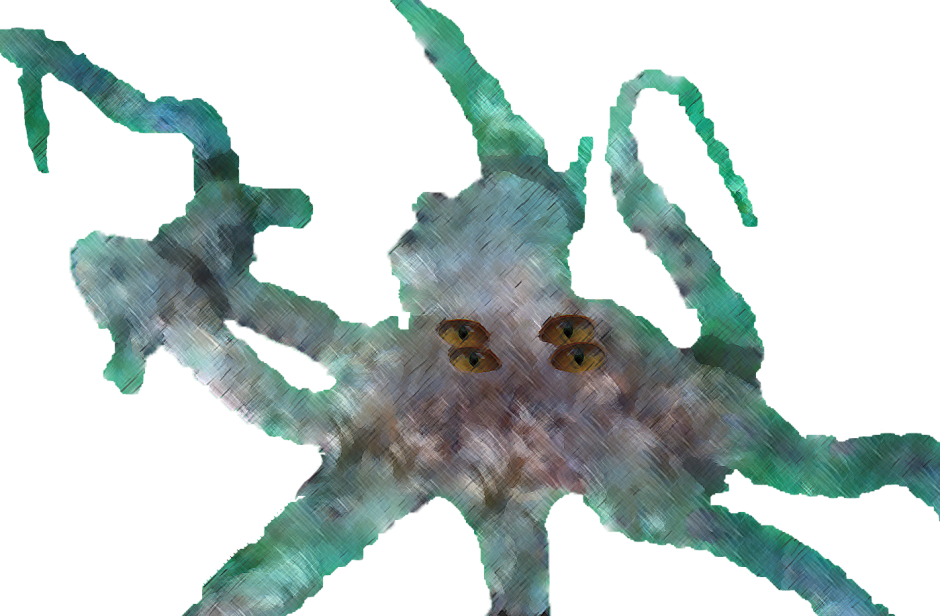 In my post on character creation in Dark Horizon, I explained that your character will have the descriptor, type, and focus common to all Cypher System characters but also a Species and Culture that will make them more unique with more options for abilities. This is the first of those options, a Species template for the octopus-like dupalans. There are five more of these in store so let me know what you think of this one before I get too off base!

When dupalan scientists first puzzled out the secrets of astrophysics, they realized that their sun was an old, red star nearing the end of its life. The system would be destroyed in only a few million years: nothing to cause panic over but far less than most species had to deal with.

This was the way of things until a chance encounter with a rogue planet disrupted the delicate balance. If the planet had impacted things might have been fine but instead it passed close enough to warp the star’s photosphere and then continued on pulling a plume of material with it. This massive, spiraling flare was going to intercept Dupal in a few decades and shatter the planet. They had to leave.

The worldships that the dupalans built are true marvels to this day. Made of hollowed asteroids the size of small moons they were outfitted with enormous engines to move the mass up to a fast enough speed to leave for another system in search of a new home. It was a rushed plan and none of the nation-states on Dupal could agree where to head. So the more than two dozen worldships left for more than two dozen systems.

Contacting the Vincularium, the worldships settled in their various systems and became asteroids again. Billions left the worldships (which were hundreds of times too big to fit through even large Gates) and in time the dupalans became just another Vincularium species scattered throughout known space.

With the Network Collapse they transformed back. Those aboard the worldships reignited the engines and traveled between the stars again, the means of their exodus once more becoming cultural symbols. In the reconnecting galaxy, dupalans have a reputation as true interstellar travelers, the species that continues to spread when the rest of the galaxy hides in fear.

Dupalans have an internal skeleton but they mostly resemble invertebrates with radial bodies and ropy arms. To humans they most closely resemble the octopus, despite the wiry fur that covers their body and the four slitted eyes on the fronts.

The closest ancestral species to dupalans are amphibious creatures in cold-adapted regions (now, of course, only seem in worldship zoos) and many of those features are still seen in dupalans. While they are fully land-adapted and most comfortable around 70°C they can easily be genetweaked to enhance their aquatic abilities and low-light vision.

They are still predators instinctually and dupalans are usually focused on goals and practical matter. However, they have a predisposition to ambush hunting and part of the comfort with space travel is their patience.

Whether because of natural instincts or the diasporic history if the species, dupalans usually place little intrinsic value in family ties. Simply being related to someone genetically is unimportant if their are not other social ties in place. On the other hand, debts of service are considered very important and many members if mixed-species crews will find their dupalan crewmates eager to quickly repay favors before they feel awkward.

Play a Dupalan if You Want to…