So today I’m trying out one of the latest Shadowrun sourcebooks for the game’s fifth edition. Rigger 5.0 is a rules expansion for one of my favorite archetypes in the game: a tech who controls vehicles and drones with his mental cyberware. Some of them specialize in becoming one with their vehicles but I always prefer the swarm of drones surrounding a badass runner.

This character is going to be an ex-military rigger, someone who spent a lot of time in hot zones working with state-of-the-art combat drones and vehicles. Now he’s trying to make a living as a shadowrunner in Seattle, working in cobbled-together conditions and making do with equipment that’s constantly in danger of falling to pieces.

Shadowrun Fifth Edition, in case you’ve forgotten, has a Priority System for character creation. That means you can get a really good metatype, an awesome set of starting resources, or tons of magical ability, but not all of them at once. You rate everything A through E and consult a table to see what you’re working with. 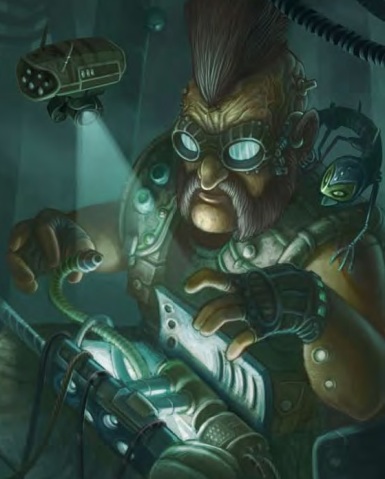 I like dwarves for my rigging characters. They have natural toughness and some good abilities which means I don’t have to spend priorities boosting those just to make sure I’m not a weakling when things go to hell (not “if” but “when”). I also need some good resources to buy lots of toys and skills to use them well.

My priorities will be set at Resources A, Skills B, Metatype C, Attributes D, and Magic/Resonance E. This metatype priority row gives me Dwarf (1) which offers thermographic vision, pathogen and toxin resistance, and increased lifestyle cost. I’m spending my Special Attribute point on an increased Edge (always useful).

My Attributes all start off at 1 except for Body and Strength which are at 3 and Willpower which is at 2. I’m spending my 14 points in Attributes to raise Intuition, Logic, and Reaction to boost my rigging abilities. I’ll also push Willpower to reflect his military training.

I don’t have any Magic or Resonance so I’m on to picking Qualities for this rigger chum. This is the first chance to use rules materials from Rigger 5.0 so I’ll definitely pull out at least one of those. Definitely going for Juryrigger (10) from the core book which accounts for nearly half of my starting Karma. I’m also getting Subtle Pilot (4) for a few different skills, which allows him to hide while rigging (something I can see coming in handy on runs).

I also want to pick up Dealer Connection (3) for a drone and ground craft dealer who knows my rigger well and offers him a discount. This can be another veteran trying to make a new life, someone who knows what it’s like to come back from war and find a very different world at home. I have to get this Quality twice since it’s for two types of vehicles.

For Negative Qualities, I’m going with Addiction (Severe) for BTL chips. This is how he deals with his post-traumatic stress from combat duty and it gives him 20 extra Karma points. This requires indulging in my vice at least once a week and it also imposes a -2 penalty to all Social rolls, but I’m not trying to make any friends here.

I’m left with 21 Karma points to spend during the game itself, which should help with some further customization.

I have 36 points to spend on individual skills and 5 to spend on skill groups. Starting with the groups, I’m putting some skills into Cracking (for resisting enemy deckers), Electronics, and Engineering.

The skills I need are the Pilot skills, Perception, Navigation, and Gunnery. I’m also going to get some Pistols in case things go south, especially since my Agility is terrible. Putting four into each of those gives me damn good ratings overall and I have 8 points to spend on knowing stuff. I’m going to use two of those towards a Drones specialty for two Pilot skills and then spend the remainder on Street Knowledge (Criminal Organizations) and Professional Knowledge (Military Service). 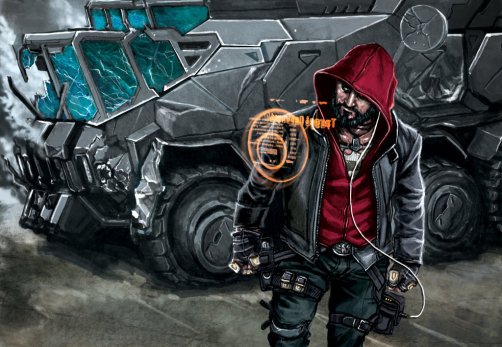 Now the really fun part. Riggers are made or broken by their gear so that’s why I made it Priority A. I’ve got 450,000 ¥ to spend and I’m going to buy some big-ticket items.

First to pick up some “survival gear” including a pistol (a good ol’ Ares Predator with extra clips), a hidden arm slide with a holdout gun, smartgun systems, a lined jacket (gotta have a duster, right?), a silver credstick, a Fake SIN, and a helmet with trodes and such.

I also need a Rigger Command Console and I’m going all out with a Triox Ubermensch (Device Rating 6) control rig and an internal Headgear Control (Rating 2). These will run all my little toys.

Speaking of those toys, here is my loadout that I’m going to be commanding.

These drones should let me participate in all sorts of runs. I can provide combat backup (with the Lynx, the Roto-Drones, or the Sentries), I can spy on targets (the Fly-Spy or the lifelike Pigeon 2.0), I can provide tech support to teammates (with my tech skills and the help of the Proletarian), I can scope out buildings and help a hacker with infiltration (the Fly-Spy and Hedgehog)… Things are looking up for this dwarf. Plus, I’ve got 140k ¥ still for costs that come up during the game!