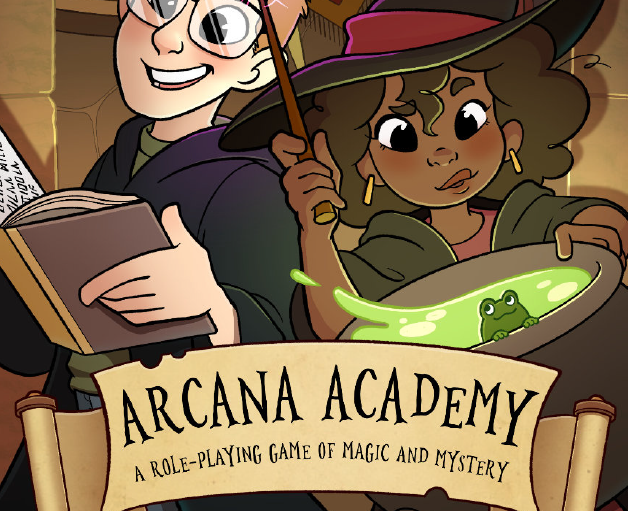 I’m here today with a review! Been a while since we did one of those but there’s a lot of talk about alternatives to Dungeons & Dragons following some much-deserved criticism of the company and game. If you like magic but want something more homey, friendly, and inclusive, consider the game I’m here to talk about today: Arcana Academy.

Arcana Academy clearly draws its inspiration from the Harry Potter universe (another franchise going through some long-deserved critiques) but it’s not a carbon copy or just a knock-off version of Hogwarts. It has it’s own personality and is extremely adaptable so this can be exactly your version of a school for magic.

This game is definitely in the Powered by the Apocalypse family, but it eschews playbooks entirely for a totally freeform creation style. Your character’s stats are entirely made up of three different traits, making it somewhat like City of Mist characters. That game still uses themebooks, though, with prompting questions to help shape what your character’s core concepts are. Arcana Academy points you towards beliefs (what you hold to be true), personality (what makes you unique), talents (what you’re particularly good at), and resources (things you can count on).

For example, you might think of a character in the vein of Luna Lovegood, the somewhat-spacey Ravenclaw from Harry Potter. She certainly has the Belief of honesty first, and a Personality that is friendly to everyone. Her third trait could be the Resource mind full of secrets or another Belief of there’s mystery out there. Once you have your traits down you attempt any task with 2d6 and the standard PbtA results (6 or lower is a fail, 7-9 is a success, 10+ is a great success) but you can add +1 for every trait that applies. Luna might be rolling a straight 2d6 for something like scaling the side of a tower, but getting the cooperation of centaurs could get a +1 for her Personality trait and talking a professor out of detention could get +2 for friendly to everyone and honesty first which count on her reputation at the school.

Likewise conditions, another PtbA standard, are the consequences for failed rolls and other character’s spells (more on those below). Conditions are tied to character’s traits and while they apply to your trait you can’t use it to help your roll. If a condition gets applied to an NPC, it instead becomes a one-time +1 bonus for PC rolls when they can apply it.

In addition to traits, your character has spells that give a +1 bonus to your rolls. Like traits you start with three of these, but unlike traits they come in a number of pretty specific categories…

Power spells are straightforward effects that change the environment in a very unsubtle way. Influence spells are for manipulating others’ emotions or senses while Change spells transform the shape of things. Knowledge spells are about gaining information (clairvoyance, telepathy, etc) while Mobility spells are about getting places. Creation spells make or summon things, and often their use is pretty narrow.

Because you’re just starting on your magical career, you’re not the best at them and all your spells have weaknesses attached to them. What something your spell doesn’t affect? What’s a situation it won’t work in? What’s a specific thing that has to happen? Imagine a spell to create light that doesn’t work when you’re tired, or a lightning bolt spell that won’t affect faeries.

Each adventure (mystery) you finish lets you remove the weakness from a spell you already know or learn a brand new spell. Your core character remains those three traits you picked earlier, then, but your spellbook keeps expanding. The only thing that might be annoying is if you want to have a lot of spells, especially small things like changing the color of your hair. There’s nothing preventing you from having those things, though, they just don’t have a mechanical effect. I’d love a small spot on the character sheet for “simple spells” (or “cantrips” I guess) and a section talking about what simple things a magic person might do.

So what are the things you can do in Arcana Academy? Every PbtA game has moves that characters can attempt and this one is the same. Every thing you try to do in the game falls under one of these moves.

Take Action is for doing something risky or dangerous, while Sneak Around is for being more cautious. Convince Someone is self-explanatory as is Figure It Out (which lets you ask questions on different success levels). Lash Out is for making physical or emotional attacks, something extremely necessary in school.

These moves are all simple and flexible so I think they should cover whatever you need in your game! The only thing that I see as missing is a move to interact with magical creatures, though that can easily be covered with Convince Someone. Since magical creatures are a huge part of these sorts of worlds for me, though, I’d definitely be adding a homebrew move called Handle Animal or something like that.

This game is short, easy to learn, and exactly the sort of thing to help you create a fun, uplifting game. This is potentially an awesome way to introduce new players to tabletop gaming. The pictures are cute and the information on a ready-to-go magical school (Warwick Academy) complete with quirky faculty. It’s great and ready for you to grab now off itch.io so try it out!

One thought on “Arcana Academy Review”