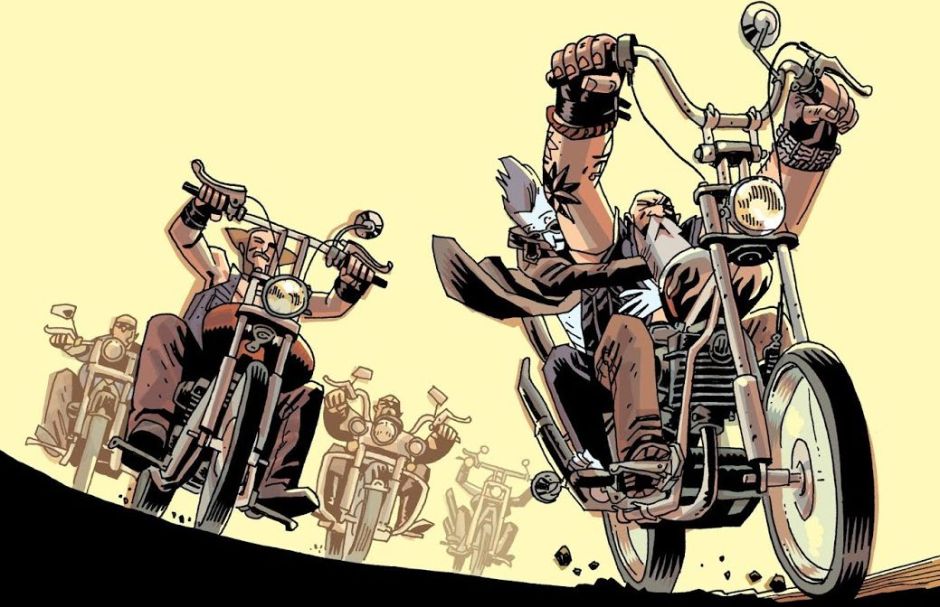 I’m back today with two short characters for your City of Mist campaign, specifically ones that are tied to the Fianna Rifts David Marcus and Laney Dearborn. These characters are presented as Allies that you can add to your character through development as part of a campaign. You can add the story of the Warriors biker gang as a side story in any case you like (including published ones) or use gaining more power as a story to pull David, Laney, and their allies along through multiple cases.

When David Marcus returned to the Warriors after his father’s death, it wasn’t to a leaderless group. One of the old man’s lieutenants, Blood O’Doyle, had taken over the gang and wasn’t terribly interested in stepping down. Fortunately for David, he also wasn’t terribly good at fending off a rival. After a fistfight that went seriously against Blood, David offered him a way to leave and save face. There was no way for Blood O’Doyle to leave the gang or even to feel good about it, but at least he wasn’t definitely out to kill Marcus.

There’s a good chance of meeting Blood again and turning him into a friend again. If that were to happen, it would be a definite gain since O’Doyle is both physically imposing and a deadly shot with his twin Desert Eagles. The option presented below is an Ally Themebook to add, but Blood O’Doyle can be used as an NPC with the Hitman statblock.

When David was a boy, Sam was a trusted supporter who carried messages and watched rivals on behalf of his boss. As he got older, this teenager gained more position in the gang and was further into the boss’s inner circle. It was Sam who convinced Leah to take David across town when things got heated with a rival gang. In the middle of that turf war, Sam was cornered by the police and took the fall to keep his boss out of jail. On the inside he worked his connections and came out of jail with many new criminal friends and a newfound appreciation of the legal system. Or at least how to manipulate it.

Sam Fenneck is a charming and confident man in his late forties with a dangerous edge to him. He prefers not to get his hands dirty anymore but is capable of taking a swing when needed. Mostly he wants to continue his role as supporter and confidant, working his way into the trust of new gang leader David.

When won over as a confidante, Sam Fenneck is used as an Ally Extra Themebook. As a separate NPC you can use Investigator NPC statblock, rewritten to be criminal.