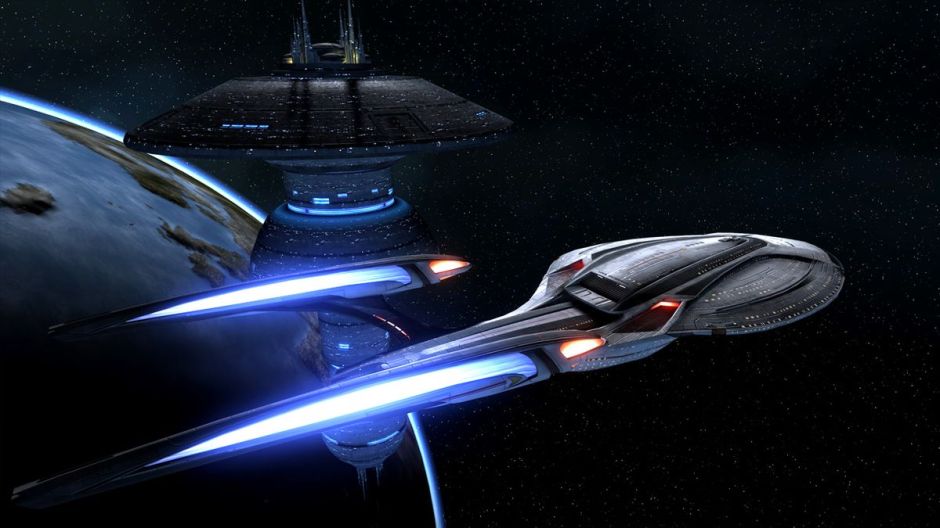 Welcome back to another addition to our growing list of Star Trek Online spaceframes! I’ve got to keep up on this because they keep adding more ships, but today I’m going to talk about some spaceframes that have been around in the game for quite a while.

The Star Cruiser spaceframes are described as “the most advanced cruiser in Starfleet,” a successor to the late-24th century Sovereign class and its variants. The first release was the base star cruiser model, the Emissary-class star cruiser which has a silhouette similar to the Intrepid class (and a saucer section like the Prometheus class) but it around 700 meters long which makes it twice the length of the Intrepid and longer even than the Galaxy class. The Emissary class is detailed in Starship Sunday, though we should update that design with the 25th century rules.

The Vanguard-class variant is a more combat-focused star cruiser, elongated and with a carved-out sucher section sporting armored patches and thick buttresses. It’s got taller pylons and pointed nacelles, as well as multiple torpedo launchers and powerful shield emitters. I see the Vanguard-class variant as a limited production spaceframe, a powerful command ship for fleets in combat zones produced for special circumstances. There are escort classes for combat already and multi-function flagships so the need for a combat-focused flagship is a narrow overlap. It’s definitely necessary sometimes, though, so a dozen Vanguard-class vessels seems just about right. To create a Vanguard-class spaceframe, start with the Emissary-class stats and change the Entered Service date to 2404. Decrease Computers by -2, and then increase Structure and Comms by +1. Decrease Engineering to +0, increase Security to +1, and change Redundant Systems to Advanced Shields in the ship’s list of default Talents.

A more balanced version is the Sentinel-class which has Systems and Talents that set it up for even more mission types. The Sentinel class is shorter with a rounder saucer section than the Emissary or any of its other variants. It’s a callback to the Sovereign-class spaceframe, though with the silhouette and nacelles of the other star cruisers. In many ways this is the star cruiser version which is the most star cruiser of all. From the Emissary-class stats, change the Entered Service date to 2405 and decrease Computers by -2 in order to increase Structure and Weapons by +1. Departments can stay the same but replace Advanced Sensor Suites with Command Ship in the spaceframe’s list of default Talents.

Lastly, the Nomad-class variant also has some armored sections but also has a more compact design with thicker, more powerful nacelles. The pylons sweep backwards like the Akira-class heavy escort and the Luna-class reconnaissance science vessel, giving this variant a faster and sleeker look. I am going full-speed ahead with this (ha!) and considering the Nomad class to be an exploration vessel design with impressive speed and staying power. This spaceframe was launched in the same year as the Vanguard class (2404) so start with the Emissary-class stats and decrease Computers by -1 to increase Sensors by +1. Decrease Command to +0, increase Conn to +1, and replace Redundant Systems with Modular Laboratories in the spaceframe’s list of default Talents.

Taking the advancements of the Emissary-class star cruiser above, Starfleet continued its innovations and in 2409 launched the Odyssey-class advanced starcruiser to be the flagship design of the fleet. One of the largest designs ever to come out of the Utopia Planitia shipyards, over a thousand meters long which is half-again the length of a Galaxy-class ship. The Odyssey spaceframe is a new “super-capital” line of ships that were launched in the face of renewed hostilities with the Klingon Empire and a resurgent Romulan Star Navy under the command of Empress Sela. The Odyssey class was covered in Starship Sunday for your cutting-edge crew, and you also should update this one with the 25th century rules.

The variants are very specifically themed in Star Trek Online to fulfill certain mission types and captain preferences. The Endeavor-class cruiser is a tactically-oriented variant of the Odyssey class, with a triangular saucer section design and split pylons with the black paneling that’s typical of the 25th century designs in Star Trek Online. It’s fast and powerful, able to take a punch and deliver some rough payback at the same time. Start with the Odyssey-class stats and change the Entered Service date to 2411, then decrease both Computers an Sensors by -1 to increase Weapons by +2. Decrease Medicine to +0, increase Security to +1, and exchange Modular Laboratories for Improved Impulse Drive in the spaceframe’s default Talents. For good measure, add phaser beams to the armaments list.

The Sojourner-class variant is almost the opposite in design: rounded nacelles and a perfectly circular saucer section. The wide saucer section means that the Sojourner class has ample interior space including cargo holds and shuttlebays. This variant design is for long support missions to hold the Federation together through difficult times. It was launched at the same time as the Endeavor class (2411) and to make a Sojourner-class spaceframe you start with the Odyssey-class stats and decrease Engines by -1 to increase Computers by +1. Decrease Medicine to +0, increase Engineering to +1, and exchange the Modular Laboratories Talent for Secondary Reactors as well as adding Extensive Shuttlebays to the list.

The Yorktown-class variant must be a common option since it’s the class of the Federation’s flagship in the Star Trek Online era, the U.S.S. Enterprise-F. It’s listed as a “science star cruiser” and as a result has improved sensors and laboratory resources to carry the torch of Starfleet’s mission in the galaxy. Start with the Odyssey-class stats and increase the Entered Service date to 2411, then remove Improved Hull Integrity from the spaceframe’s default Talents list and replace it with High-Resoluion Sensors.

At the other end of the spectrum, the newly revealed Verity-class spaceframe variant is listed as a star cruiser but classified as a “dreadnought.” This is what happens when Starfleet goes through several back-to-back wars, sees an approaching Borg threat, and is dealing with Dyson sphere after Dyson sphere connecting regions of space and throwing things into chaos. It’s nuts out there and the Verity-class is the answer to the question of why the Federation can’t just have nice things. It has an Entered Service date of 2412 (the current limit of the STO timeline) and from the Odyssey-class stats you should decrease Engines by -1 and increase Weapons by +1. Decrease Medicine to +0, increase Security to +1, and you should have something similar to the Endeavor-class spaceframe. We’ll change that, though, by switching up the default Talents list: remove Modular Laboratories, and add Advanced Torpedoes (Tricobalt) as well as Ablative Armor. Like the Endeavor class, we’ll also add phaser beams for more combat options.