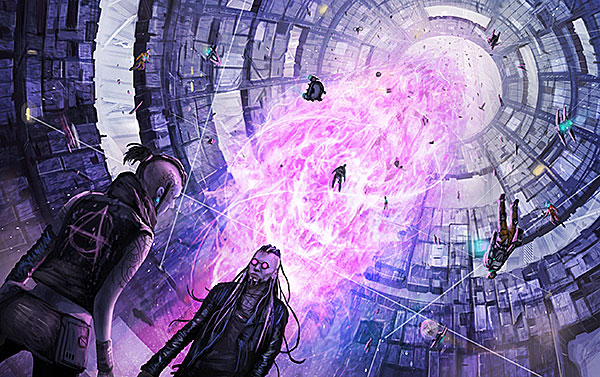 Almost four years ago I put up a post outlining the custom muses that I let my players develop for Eclipse Phase. With the game now in its second edition those rules are outdated but I really want to keep using them. These are my rules for creating custom muses in Eclipse Phase 2e, or really any Artificial Limited Intelligence (ALI). They’re a first draft but this should give you the ability to add custom ALIs of all sorts to your game and make the setting feel more lived-in.

In the first edition of the game, I regularly used this forum post by consumerdestroyer (building on an earlier post by CodeBreaker) as well as a fantastic post by the Alexandrian on making muses pop more. Artificial Limited Intelligences (including muses) are described in Eclipse Phase 2e, p. 250, and they are described with more mechanics on p. 326. There are three different levels of complexity when it comes to ALIs:

The most common type of ALI that people will interact with, by a fairly healthy margin, is muse programs. Pretty much every person in Eclipse Phase has a muse (besides the highly bioconservative) and while their appearance and personality might vary, under those cosmetic details they mostly function the same.

Most people have a standard muse, both in terms of complexity and in terms of abilities. This is something like what’s shown on page 327 of the second edition core rulebook. Prepackaged muses are designed to be companions, assistants, mesh-searchers, and generally personable go-getters. Not everyone wants that, though, so players might opt to design their own muse as a standard-level ALI program. As stated on p. 68 of the core rulebook, everyone starts with a free muse. You can consider this 2 bonus GP for your muse so if you get something cheap and minimalist you can get a bonus GP or you can spend a GP in addition to this free one to get an advanced muse.

As described in the second edition core rulebook, all ALIs have a core set of stats that are universal. They are in informorph with Wound Threshold 4, Durability 20, and Death Rating 40 for mesh combat. Muses also have the Enhanced Behavior (Obedient, Level 3) and Real-World Naiveté traits. If your ALI is (for some reason) in a synthmorph then those first three stats will likely change, but the traits remain.

When customizing an ALI, the most amount of tinkering will happen with the program’s skillset. Depending on complexity, the program will have a default number of Active Skills and Know Skills, plus a number of skills that can be either. Programs also have a number of points to assign to these skills.

Additionally, any muse programs have +25 to both Interface and +20 to Know: Psychology. Whatever else they have, they are designed to support their owners.

Name: Self-­‐explanatory. As limited artificial intelligences, muses have their own identities.

AR Avatar: A description of the muse’s “physical” appearance when it appears in AR (or VR).

Roleplaying: This is the heart of the briefing sheet, but it should also be the shortest section. Two or three brief bullet points at most. You’re looking to identify the essential personality traits or mannerisms which will serve to unlock the muse.

Motivations: Like any other character, muses should have three personal motivations (Eclipse Phase, pg.138). These may mimic, support, or even contrast the motivations of their owner.

Background: This is likely the only section of the briefing sheet which is likely to need frequent updating. I recommend a single bullet point for each significant scenario the muse participates in (and keeping each bullet point to no more than two or three sentences). The point isn’t to be encyclopedic: It’s to provide an essential overview of key facts. (If the muse’s current player needs clarification about something, they can lean over to their right and ask.)

Notes: A miscellaneous category of key information that wasn’t hit in the previous sections. For example, if the muse is currently holding the encryption keys for an important data store or is hiding the fact that they know what happened to their owner during a span of lost time, this is probably a good place to note it.

Stat Block: Include the muse’s stat block at the bottom of the briefing sheet for easy reference. Most muses will use the standard muse stat block, but they’ll still be customized by selecting three Knowledge skills. Some muses might be commonly housed in a bot (in which, case include that stat block, too); others, of course, may have received custom upgrades.

AR Avatar: A young girl with yellow hair so bright it seems to glow lemon. She usually has a cigarette drooping out of the corner of her mouth.

Notes: Aurora was infected by a “dormant” strain of the exsurgent virus. It hasn’t had any visible effects yet, but she’s been spending her down time secretly researching a very strange and seemingly random set of topics. (List anything she researches on the back of this sheet, please.)

To start off with, Aurora has 10 in all of her aptitudes 10 except for a 15 in Intuition (she’s not that weird of a muse).

Her muse bonuses and the aptitude values give Know: Psychology 35 and Interface 30. We’ll spend 35 more points to make that Know: Psychology 60 and Interface 30. That’s one Know skill but let’s add three more for good measure  with Know: Simulspace Design, Know: Celebrity Gossip, and Know: Accounting. Each of these start off at 10 due to aptitudes, and we’ll use 90 of our points to make those 30, 30, and 60 respectively.

This was a bit of a test to see how it worked out and interestingly the stats are nearly identical to the Alexandrian’s original post stats. This is a pleasant surprise as the calculations here are based 100% on the 2e rulebook so it’s great to see we’re lining up so well.