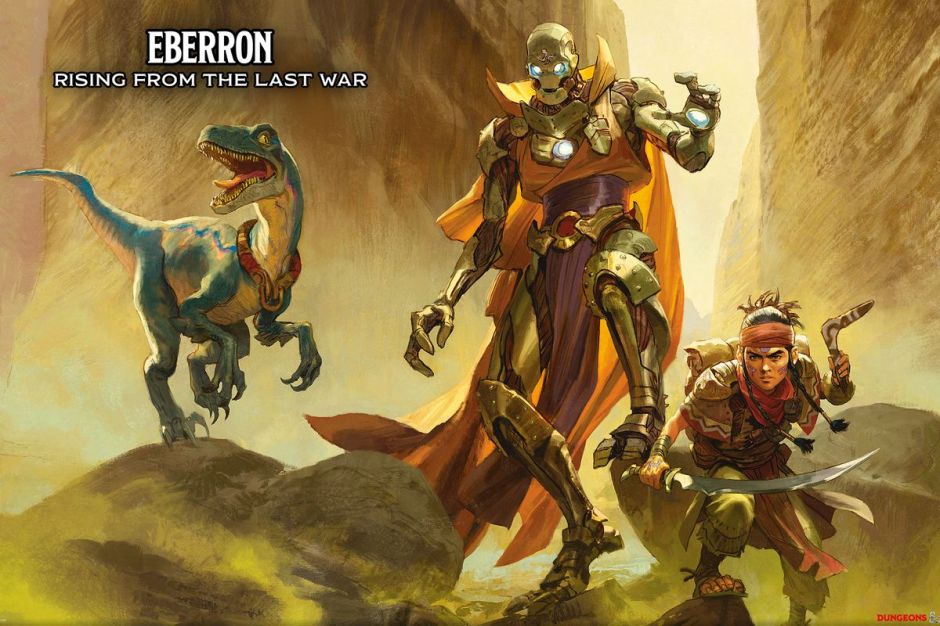 Alright, we’re back! So last time we looked in depth at the character creation portions of the book and found them interesting but mostly updated versions of what’s in the Wayfinder’s Guide. That’s just the first third of the book, though. Today we’re going to be looking at the setting information and what it can offer to new and veteran players in Eberron.

Chapter 2 of the book is a survey of Knorvaire, the main area for Eberron campaigns, with a bit at the end about the broader world. The chapter is set up alphabetically for the Khorvairian nations, with about two pages per nation, with some basic details, a list of Interesting Things, some character ideas for people from this nation, major cities, and how the nation has changed in the Aftermath of the Last War. There are some fun sidebars as well depicted as news clippings from papers like the Korranberg Chronicle or the Sharn Inquisitive. You might not get a clear image of the physical nation (where things are, what the long-term history of the nation is, etc) but this is definitely the way to make the setting a part of your campaign.

The Five Nations are familiar territory to Eberron fans and newcomers should get used to them as well. Aundair has a lot of notes all about magic, of course, and there are some great ways to make that a subtle part of the setting from giving your character Magic Initiate no matter their class to the generational arcane pacts of Aundairian nobles. The info on Breland is also pretty great and (thankfully) not entirely about Sharn. I like the idea of innovative PCs of all classes, the extra info on blank slate Vathirond, and the staging of the king’s Winter Palace by democratic protesters. I love the choice of “Cyre (The Mournland)” as the title for that lost country and there are just as many details about Cyre that was as there are about the wasteland following the Mourning. The prompts for Cyran characters are “what have you lost?,” “what do you hold onto?,” and “what drives you?” which helps you develop a refugee character from Cyre.

Karrnath has always been the “dark and brooding” nation of Eberron and this goes towards fixing that somewhat. Following the example of The Five Nations, Karrnathi characters have a rich and compelling culture aside from any connection to the Blood of Vol. On the other hand, a sidebar clip from the Korranberg Chronicle shows how the mystery surrounding King Kaius might look from within the setting. Thrane has also been one-note for a lot of Eberron’s lifespan but it has really become more interesting hear and closer to what I’ve seen the setting’s creator express in the past. Thrane as portrayed here is not a nation of zealots and hate-mongers, but a nation of religious folk trying to do good but with some bad eggs thrown in… like everywhere else.

I also love that Thronehold gets its own section in this chapter and even though its short I have lots of ideas buzzing around about a Thronehold native character. I haven’t thought about this corner of Eberron much but the grim, calculating, political arena described here seems really awesome.

The Rest of Khorvaire

The nations of Droaam and the Eldeen Reaches have all the same information as the other nations but there’s less tying them to the greater world. This is consistent with other editions but I was hoping for a little more this time around. There’s lots of information expanding the Lhazaar Principalities as well in a way that makes it a more interesting place to tell a story. Q’barra gets a similar treatment but it’s still a pulp action treasure hunt locale more than a frontier nation with a developing, melting-pot culture. There are prompts to think of why you might have come to Q’barra but what about people born there? What about efforts to have Q’barra recognized as an equal by the Five Nations?

The goblin nation of Darguun has the history of the land through the Last War (you’ll have to check out the paragraph on the Dhakaani Empire in the intro for more) and it’s portrayal as a frontier nation really makes it playable in a way that other editions haven’t managed to. The tips for making goblinoid characters from Darguun are great since the defining characteristics of the nation aren’t different racial stats. There are even cultural notes to get you into the spirit of the new goblin homeland and connections to other parts of Khorvaire that are really compelling. A similar treatment, though not as well done, is found with the Shadow Marches which prompts players to think of Marcher characters who are more than just swamp-orcs.

Likewise, the Demon Wastes seem more playable than ever with notes on making both Ghaash’kala characters and Carrion Tribes characters. Still not a ton of information on what settlements like Ashtakala or Desolate look like, and nothing about Aftermath of the Last War, but for the first time I’m considering including this land in a campaign.

I mentioned changes to the Mror Holds last time, the inclusion of some subterranean horrors that the dwarves are fighting which is forcing some to turn to Khyber symbiotes to survive. There’s definitely a focus on the “Realm Below” in this version of the Holds, which is admittedly better than the focus on money and House Kundarak previously. Still, I’m hoping to see an interesting place where Kundarak, the Aurum, and mineral resources are found rather than a collage of all those things and we’re not quite there yet.

On the flip side, the Talenta Plains seemed mostly like a name on a map in the first edition of Eberron and it has truly come into its own by this book. There is a lot of attention spent on the traditions of Talentan characters (the Plains contain a lot of manifest zones to Dolurrh and Thelanis, for example, which explains the halfling preoccupation with ghosts and spirits) and it’s clearer to see how the tribes of Talenta became city halflings of the Five Nations. This obviously benefits from all the articles and musings over the year but they are integrated very well. The same can be said of section on Valenar which explores both the culture of this nation and the religion of the Tairnadal. I always thought of Valenar as a place for elves to come out of but the home politics as described in the Aftermath of the Last War are pretty awesome.

Lastly (as always) is Zilargo which has truly moved into “nation of spy-gnomes” territory with this edition. It’s been edging there for a while but there’s certainly a “eyes of the state” situation in this section. At the same time, the portions on characters are focused on culture and society for your Zil character that shows potential for playing out this character in your campaign.

The Rest of the World

I love the foreign lands of Eberron as much as Khorvaire, maybe even more so. There’s not going to be a ton about them in a basic setting book like this (the narrow focus being one of the selling points of Eberron) but the structure of the chapter makes this even more useful than ever. Each entry details what Khorvairian characters might do there, interesting sites in the region, and how it influences matters in Khorvaire. Each also contains a “Trinkets” table which allows you to sprinkle exotic items into your campaign without it being a whole plot hook thing.

Aerenal, homeland of the elves, gives heroes the chance to “team up with an agent of the Undying Court to bring down a powerful vampire,” and that alone should show you why it’s relevant. Not much is expanded on in terms of culture or geographic detail, but I appreciate the updated map with Common translations of the Aereni names. Argonnessen might seem like the hardest land to integrate into your campaign but the prompts for going there and for its influence certainly inspire me. Khyber is given as a foreign land as well with a little more information than most and some pretty frightening plot hooks just waiting to be sprung. Even the North and South Poles, or the Frostfell and Everice respectively, feature ways to bring their goings-on home to Khorvaire to mix it up with your PCs. Sarlona and Xen’drik, of course, have a lot going on and there’s a lot here for starting DMs and players, but if you have Secrets of Sarlona and Secrets of Xen’drik then you’ve got all this information and more.

Clearly I’m enjoying this book because I’ve filled up a whole post again. There’s a little more to this chapter, information on Faiths of Khorvaire and Sharn, City of Towers which are great but mostly synthesized from previous books (I do love the three-and-a-half page table of Sharn neighborhoods, though). There’s a lot to summarize but you can find information on these topics elsewhere and I don’t want to add another post for those. I will say that both Faiths of Eberron and Sharn: City of Towers are excellent resources still and match up exactly with what’s written here.

Next time I’m going to take a look at some of the crunch again: the treasures and creatures in the book. There are some familiar game elements but also some new ones and I can’t wait to see them. If you have the book already and I missed a favorite part in here, let me know!

2 thoughts on “Rising From the Last War Review, Part 2”