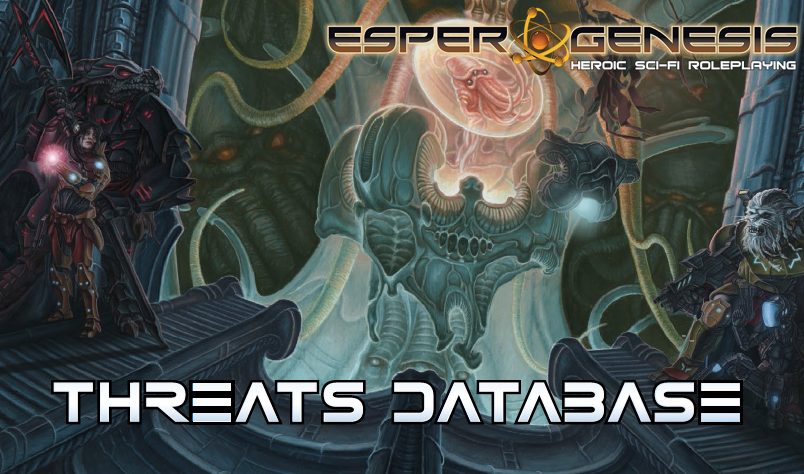 I’m back with more information about the Threats Database for Esper Genesis. Last time, I talked about some of the creatures featured in the book and how they stacked up to what’s already available and what you might need for an Esper Genesis campaign. Today I keep going and I delve into some of the weirder stuff in the Threat Database.

A lot of the creatures in this book are the sort that you would use to scare the crud out of your players. They are disturbing and horrific creatures that can menace your players or turn your Esper Genesis game into a sci-fi horror mash-up. The first one of these, first entry in the book in fact, is for aberrants. These were referenced in the core rulebook for Esper Genesis as what happens when the metamorphosis that the promethean playable race (a transhuman cult of body-modification) goes wrong. In the core book there’s just a sidebar saying (effectively) watch out for those aberrants, but here we get to see what they are. They have variable abilities in keeping with their origins but the aberrant controller has other innate powers and some nasty resistances.

Seethespawn are a similar creatures in that they come in a few different versions, but they’re best described as “space demons.” With names like flayer, gorger, and screecher you can appreciate the amount of horror in these things and it’s confirmed with the picture which looks like a corpse sprouting tentacles from its back. Cronosytes are also tentacled monstrosities but they are more crystalline in appearance and they have a time-traveling theme (not surprising considering the name). They aren’t evil per se, but they warp spacetime around them and wander the galaxy looking for… something?

In the category of “weird as opposed to terrifying,” the f’narg are shapeless blobs that can read your thoughts and the quantum worm is what you’d get if a purple worm and a phase spider had a baby, and that baby lived in space. Lastly, the kreiden look like alien versions of an orca whale with a dozen eyes and back legs like a spider’s. They’re impressive to look at but also have powerful psionic abilities, a combination that both impresses and disappoints me. On the one hand they’re really just a rip-off of aboleths, but on the other hand they’re a pitch-perfect rip-off that neatly fits them into the sci-fi setting of Esper Genesis so they’d feature prominently in my games.

Esper Genesis is definitely a science fiction game, but it’s also a setting with a lot of magic in it. Some of the magical creatures in this book are very familiar magical tropes like the Bahtera, which are unapologetically just elemental-themed dragons, or the bonded companion, which is an energy-familiar for your arcanist and can be either good or evil. Drakes are another option for elemental dragon, though the less imaginative option (bahtera are sci-fi themed dragons, drakes are just dragons in space), while the necromantically-charged evargun are horrors from the vacuum that seem like astronomic xeg-yi.

If you want more versions of elementals, the creepers are frost-, sand-, and tar-themed primordial creatures and power sprites are tiny little motes of magical energy. Velbasts are like living spheres of annihilation (a terrifying thought) and spyders are phasing insectile elementals that could be your familiar if you have a nice enough GM.

The first appendix in this book contains a crowd of NPCs for use in Esper Genesis. These range from foes (like the energy-draining alterist to the gang member) to potential allies (like the expert pilot or the drone-operating machinist) with many others in between. There aren’t any specific NPCs with backgrounds and personalities so these are more like templates that you can use to populate your galaxy. A few of them are useable in other sci-fi campaigns but most have esper powers so you’d need to heavily modify to use them in other places.

There are two sections of this book which deal with modifying stat blocks for your Esper Genesis game. The first is a short section in the NPC chapter about applying racial modifiers, giving advanced gear, or otherwise altering an NPC. It’s not even a page but there’s lots of good advice there.

Of slightly more use is the second appendix of the book which talks about “miscellaneous creatures.” These are the background creatures that fill the jungles, oceans, and alleyways of your galaxy, the random animals in the galaxy like the animals in the back of the Player’s Handbook and the Monster Manual. You can start with something like a cat, a an elephant, or a giant constrictor snake then add one of the additional features like Illumination (for a glowing cat) or space adaptation (for a space-elephant!). Go crazy if you like but you can also think of the sort of ecologies you’d like to see and create from there. If you want to go all-out there are also templates for CR 1/4, CR 1, and CR3 beasts that are blank slates to apply attack types, features, and damage resistances.

The last things to discuss here are the Hazards and Threats appendix and the Threats to the Galaxy appendix whose contents shouldn’t surprise you. However, this is more than just a list of things to worry about out in space or quick skill checks to penalize players with. Some of them are just plot hooks (most of the dozen pages of the Treats to the Galaxy chapter, for instance) but they greatly expand the setting of Esper Genesis.

What I’m most impressed with, though, are the profiles of space hazards. These include a check to avoid the hazard, ship roles to handle the hazard, other roles to assist with things, and a description including the effects of the hazard. I especially like the assistance as it opens it up to a whole party to participate in. For example, if your ship is flying into a Gravity Field (whatever that is) the Pilot makes a Dexterity (Vehicles, space) check. The co-pilot can help with the same skill or the technician can assist with a Wisdom (Mechanics) check to give the pilot advantage on their role. If the Pilot’s roll fails the ship takes damage but their whole crew can help to make it work.

This book isn’t perfect, but I really like the Threats Database. Going back to my original questions from last time, I think it hits the mark on all three. The book definitely improves the setting with new threats, interesting cultures, and threats to the galaxy to expand your Esper Genesis game. There are plenty of creatures that I think I could easily do myself with a little effort but the vast majority are creative creatures that would need a lot of playtesting. This offers a lot of Esper Genesis options that I really like and it can also definitely by used for other 5e games whether science-fiction based or not.

If you’re playing Esper Genesis, then I think this book should definitely be on your must-get list. If you’re interested at all but don’t run Esper Genesis then I think you should consider just going for it as this book is both intriguing and useful. If you’ve got the book and have used it in your campaign let me know what you think!