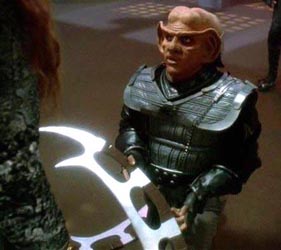 Continuing with my effort to expand your campaign options in Star Trek Adventures, I’m here today with a new mechanic for Ferengi characters! Sure they’re one of the goofiest species in Star Trek, sure they were a failed attempt at a nefarious enemy in The Next Generation, but if you watched Deep Space Nine and don’t have a soft spot for these big-eared weirdos then you’re dead inside.

It should become quickly evident to people that this system is heavily inspired by the Obligation system in Edge of the Empire. It just fits so well, so why reinvent the wheel? Of course with Ferengi we don’t have to beat around the bush: we’re talking cash obligations here. Ferengi deal in gold-pressed latinum so when they have owe something it is always and entirely a matter of money.

What Is a Debt?

In simple terms, Debt is a financial obligation hanging over the head of your character. It can come in many forms but it represents the business connections that Ferengi develop without actually detailing every transaction. In the game, your Debts will come into play to complicate your life, put you in touch with NPCs, and generally drive the plot along with your business interests leading the way. Which is as it should be.

Each Debt consists of two parts:

Ideally, the group would start with a Debt total of around 40 to 60 points. For a six-player group, for example, this means 5-10 Debt per player while for a two-player group it’s more like 20-30 Debt. It’s not that larger groups are less prone to accruing big debts, think of it from a story perspective: if there’s a large cast the story has lots of little threads to pull, while a pair of desperate Ferengi make an interesting story if there’s one massive problem they’re trying to solve.

Additionally, each player has the option of adding additional Debts for some starting bonuses. It’s recommended that players not gain more Debt in this way than their original starting value. Players also have the option of repaying Debts during the game to reduce their value as described later. For every 5-point starting Debt that a player chooses (or for every 5 points they add to an existing Debt) they gain one of the following benefits.

However, if the result is equal to or less than the group’s total Debt then some bill has come due or debtors are leaning on one of the Player Characters. The roll also determines which Debt is exerting the pressure (see Debt Chart below) and that Player Character begins the mission with a Complication related to their Debt. Unlike other Complications, this one can’t be removed with a Task or Momentum: it stays around for the entire mission.

If the roll is equal to or less than the Debt total for the group and it is doubles (i.e. a result of “22” or “44”) then the effect of this pressure is greater as the debtors lean on the character’s business associates as well, meaning the other Player Characters. In this case, there is a Complication related to the Debt that affects the whole group (and can’t be removed, as described above) and the character whose Debt was triggered does not start with the normal point of Determination (though they can earn Determination as normal during the course of the mission).

The group’s Debts are totaled to determine how often their business obligations come up in play. When a Debt is triggered you look at the group’s Debt Chart to see which specific Debt is being triggered. Debt Charts are unique to each group and should be constructed by the GM at the start of the campaign (and modified afterwards as needed). Write each Debt on a separate line, noting the character (or characters) it belongs to and use the value of the Debt to create ranges of results. When you roll and trigger a Debt, the exact Debt is then decided by the particular result of the percentile die.

For example, let’s say that four Ferengi Player Characters (Brok, Gol, Krit, and Deg) are the Main Characters of a new campaign. The GM assigns them all 10 Debt to start with and both Gol and Deg decide to take on five additional points of Debt for starting benefits: Gol just adds to his original Debt while Deg takes a second minor Debt. The GM constructs the following Debt Chart for this group.

At the start of a session, the GM rolls to see if one the group’s Debts are triggered. A result of 50 or lower means that it is and this session the GM rolls a 41. Deg’s Loan is weighing on his finances and he has a Complication called “Interest Rate Hike.”

It’s generally assumed that the financial concerns of Supporting Characters are minor enough that they don’t drive the story (the gains and losses experienced by Rom, for example, never really come up but he’s often roped into his brother’s problems). If a Supporting Character becomes important to the story, however, or if a Main Character leaves and the player takes up a Supporting Character as their new main then adding that character’s Debt and adjusting the Debt Chart is certainly applicable.

The Complications that result from a Debt being triggered can really be anything, but here are a few categories to help Gamemasters in establishing Complications during their campaigns.

Settling Debts is as simple (and as difficult) as settling them in real life: you just need to pay your way out. The circumstances might vary since some Debts (such as a loan or collections) might be fixable by cash while others (such as blackmail or a long term investment) might take special circumstances to pay out. There might be specific conditions in the Debt details about settlement (written at character creation) or you might come up with a solution as part of the game. If a scenario ends with a particular windfall, characters might leverage that into settlement for their Debt.

Debts are modified just like any other value through the use of Milestones (see core rulebook, p. 139-). After an adventure, if the Debt was triggered as part of the scenario, the character can choose to lower that Debt by 5 instead of another of the Normal Milestone choices. If the adventure featured the character prominently, they can use a Spotlight Milestone to lower the Debt by 5 (whether or not it was triggered) in addition to their choice from the Normal Milestone list. This means that a character receiving a Spotlight Milestone in a scenario where their Debt was triggered could use both of their choices to lower their Debt by 10 points. At the end of a story arc, players can choose to lower their Debt by 10 points instead of one of the options on the Arc Milestone list.

Because they get a Spotlight choice and a Normal choice as well, players could use all three to reduce their Debt by 20 points. This could conceivably pay off their obligations at the end of a arc, though they will never truly be free of their Debt as explained below.

Obligation can’t drop below 5 except under extraordinary circumstances, such as intervention by the Grand Nagus or the death of the debtor and loss of all records. Once the Obligation is paid off (see above) there is still a 5% chance of it somehow affecting the character afterwards: old bills, parties still angry about what happened, a debtor looking to get the character under their thumb again, etc.

Debts can go above 100, however. In this case, the Debt will come up every session until it is lowered below 100 as described above. Additionally, the mental and financial strain of that level of Debt weighs heavily on the characters and prevents them from focusing on much else. All of the PCs in the group gain the Trait In Dire Straits until the Debt drops below 100 and they can only use Determination for Tasks related to fixing the Debt. Effectively, the characters all gain a new Value which is Need to Deal With the Debt that is the only Value they can use for mechanical purposes (other Values remain for story purposes).

Debts will hardly ever start at 100 (and certainly not at the beginning of a campaign) but it can be raised over the course of the campaign to that level.

A great option to tie a group of Ferengi together is to give them a shared Debt. Each character has the same Debt at the same level leading to one collective Debt at an extreme value. Characters might have other Debts (through gameplay or by taking on more at the beginning) but most of the time the Debt that is triggered is the group’s collective Debt and, likely, the impetus for the story. Settling this Debt works as described above but certainly happens in stages with characters using various Milestones to bring the Debt down.

With the rules as written, characters start with a certain amount of Debt

2 thoughts on “Debt for Ferengi Characters”