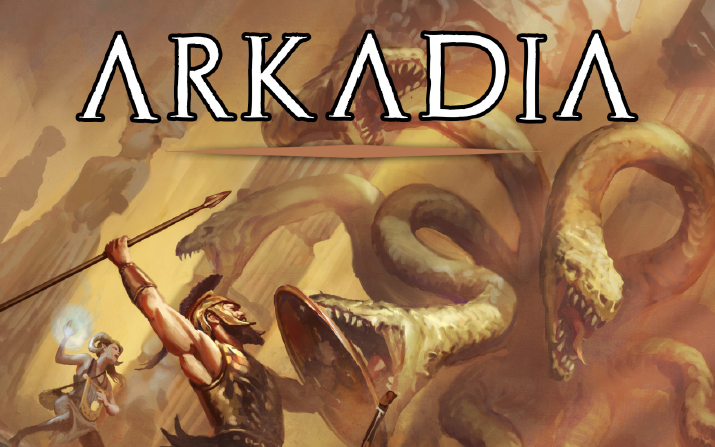 I was more than a little intrigued when I saw the Arkadia Kickstarter. Greco-Roman mythology is a rich vein and this setting promised a setting built from the ground up with this theme in mind instead of tacked on the top of D&D 5e. Now that the PDF is available I thought I’d give you all a look at what’s included!

The World of Arkadia

It won’t be shocking to learn that Arkadia is inspired by Bronze Age Greece, but it’s not actually set in that historical setting. For one thing there are elves and dwarves around which (spoilers) are fantasy. More importantly, though, everything in this setting is almost ancient Greece but not exactly and there are no simple parallels.

The world was born in dark times when the titans ruled the world but it was wrested away by the king of the gods, mighty Hyperius, and his children. Obviously Hyperius is supposed to be like Zeus and his children also have parallels to Greek gods: Krytos, god of war; Thessa, goddess of wisdom; Crixys, god of the underworld; Lyria, goddess of beauty; Erebos, god of smithing; Oreya, goddess of the hunt; and Phaedrus, god of the wild. Don’t just assume these are the same gods with different names, though. Thessa, for example, is also the goddess of the sea so she’s taken on Poseidon’s purview. Lyria is a goddess of poets and passion but also trade and gold. Phaedrus resembles the satyr god Pan but he’s actually a powerful fae who earned a place among the gods.

The titans, likewise, occupy a space much like the Primordials of D&D. They have names like “the Mother of Monsters” or “the Great Hydra” and are a source of all the monsters in the setting. The landscape of Arkadia is made up of city-states just like Greece. Hyperium is like a mash-up of Delphi and Rome, lying at the foot of Mount Hyperium (unsurprisingly the seat of the god Hyperius) and containing a Pantheon, forum, oracle, and a corps of warriors called consuls who keep the peace throughout Arkadia. This one is a little too much packed into one space for me, but it does read pretty well and is certainly an interesting location for stories.

Kryta is basically a Sparta of this place, dedicated to the god of war and filled with deadly warriors including orcish former slaves. There’s also a Roman-style colosseum and evil hordes ruled by a gorgon empress (the Mother of Monsters) that they hold at bay. Ithea is a city of philosophers and scholars with a pair of lighthouses very reminiscent of Alexandria. On the other hand, it’s also dedicated to the sea goddess Thessa and is near the ruins of flooded Scyllaea, this world’s Atlantis. Crixos has no clear parallel that I can spot but it’s a creepy place, formerly a pilgrimage destination but now suffering under a spate of undead that crawl out of nowhere and are poisoning the land around the city. Lastly, Illyria is the city-state associated with the goddess of trade and passion, Lyria. It resembles Athens in structure (it’s even got an Agora) but has noble merchant houses and a rich silk trade that hold some familiar tropes for roleplayers.

All of this is detailed enough for ten pages (plus four for the gods and cosmology) and there are other parts of the book that provide hooks for characters. For players, though, this is a setting that holds a lot of mystery and fun while also remaining familiar and accessible. You might be surprised by the philosophical School of Hekamn in Crixos but the idea of an undead city with a necromancy guild is something you can immediately grasp.

Alright, so that’s a world that echoes ancient Greece, but can it also include the elements of D&D? The first step is including Arkadian versions of the player races. Not every race is brought to this setting (though you could certainly bring your own) and there are some new ones as well. Here’s what we’re looking at…

The new races are the Phaedrans, half-fae descendants blessed by the god of the wild. Many of them live in the lands of monsters and serve those titans that hate the civilized lands, but plenty live in Arkadia among the humans and elves and dwarves. Phaedrans share a minimal amount of traits (ability score bonuses, size, speed, and language) then you pick a “subrace” which acts more like your full race. Satyrs, sirens, gorgons (medusas), harpies, and centaurs are all playable races in this setting with some pretty sweet abilities.

Each of the classes in the Player’s Handbook has a single archetype to choose from but, much like Journey to Ragnarok, this creates the problem that all members of the same class are the same. There are choices to make like skills and weapons but it is a little disappointing. On the other hand, all the standard archetypes are still up for grabs and there is some small amount of discussion in this book about where those fit into this setting.

The equipment in this book is a great exploration of Bronze Age stuff like cuirasses, sarisas, recurved bows, and tridents. There are also separate packs for different sorts of characters including entertainers, hunters, philosophers, priests, and travelers. Each of the archetypes from the last section have different starting equipment lists from what’s in the Player’s Handbook and these packs are a quick way to give them lots of setting-appropriate gear. A section of six pages also provides some magic items like Hyperion’s javelin (throwing lightning like Zeus) and a satyr’s instrument (like Pan’s magical flute). There are also separate currencies for different city-states which is a detail that I really love.

A section on ships allow you to sail the waves in style, even using Arkadian fire. These rules mesh with the rules in the Player’s Handbook but I don’t think they’re quite enough to get a whole nautical campaign together, so more of the Odyssey‘s island-hopping than a knockdown ship battle like the Battle of Actium. However, if you also got the recently-released Ghosts of Saltmarsh you got a slew of new rules for sailing and if you really like ships in D&D then you probably already ordered that one.

The last section of the book is what you’d expect to see in a setting inspired by Greek mythology: a ton of nasty monsters. Chapter 8, the part in question, is eighteen pages of mostly stat blocks that follow the almost-Greece and almost-Rome theme of the rest of Arkadia. A large portion is given to the denizens of Gargaros, the titan-ruled land north of the civilized city-states of Arkadia. The hydra of the Monster Manual is joined here by an ancient hydra and a young hydra, which is a common occurrence here. I think it’s great to expand the level ranges of these iconic monsters so that they can enter any Arkadia campaign and we’ll see that happen frequently.

The other thing that happens a lot in this chapter is setting-specific versions of monsters. For instance, the Gargaran orc is very similar to the orcs of the Monster Manual but with a few tweaks (stronger, less Dextrous, with a giant club instead of a greataxe). These same changes apply to the Gargaran orc chieftain and they aren’t too extreme. Much more exciting are the changes to the Gargaran cyclops which lower in CR but less silly than in the Monster Manual and has a mechanic where it focuses on one opponent at a time, with mechanics for distracting it and drawing its ire. This is some awesome, thematic battle mechanics baked right into the creature. The Cerberus hound is only CR 1 so you can throw it into a campaign from the start but it’s basically a powerful, deadly wolf: perfect for harrying a party that ventures into Gargaros.

Similar to Gargaros is the lost sea realm of Scyllaea, once the idyllic home of elves but now shattered and broken. Hidden amongst these broken islands is the Charybdian Maw, a massive aberration inspired by legend which is actually only a CR 8. It’s psychic powers, however, create the Black Tide which can ensorcel and warp creatures of the deep and sailors alike. Of much greater concern are the Charbydian krakens (reduced to CR 16 but still nasty) and humanoids twisted into merrows (the one in the Monster Manual is supplemented with some others). All the servants of the Charybdian Maw share a trait that they can communicate telepathically with other servants in the same body of water. These are clearly a cool and terrifying option for that nautical campaign we were talking about above.

The pseudo-Egyptian land of Nys (home to the corrupted Nyssian elves… basically drow) has a few undead options to haunt its sand. First and foremost is the Nyssian pharaoh (a lower-level but nastier alternative to the lich) but the spellcasting shades, the life-draining blighted mummy, the infectious plague zombie, and the undead-commanding Nyssian cultists are all pretty frightening too. There’s also a “runt” version of the Cerberus hound here, though why it’s in Nys and not Gargaros is unclear to me.

Next is Psysseria, land of the Mother of Monsters and therefore of medusas and yuan-ti. The Psysserian abomination is an update of the yuan-ti abomination and the Psysserian gorgon is an update of the medusa. The gorgon matriarch, though, is a pretty horrifying even before considering the legendary actions. Seriously, I mean one of the legendary actions is forcing targets to fail their saving throws against the gorgon’s petrifying gaze. Ouch. As if all of that wasn’t enough there’s a Psysserian assassin (that’s a lot of S’s), a Psysserian serpent, and a Psysserian thrall which makes this a pretty horrific realm.

The chapter rounds out with Arkadian versions of various fae: satyrs, sirens, harpies, centaurs, chimeras, minotaurs, dryads, pegasi, and sphinxes (exiled from dark Nys). While it might seem weird to just rewrite monsters that are already available (some of them in the free SRD) but obvious changes were required for the themes of this setting and it’s more convenient to have a fresh stat block than have “errata” for existing ones.

This setting hits all the right notes for me: it’s got lots of hooks and directions to take characters, there’s room for everything but thematic changes, and it is much more than I can do on my own. The art is excellent and the setting is both a rich homage to Greco-Roman history and myth, as well as being fresh and surprising for players even if they know those stories. If you have any interest in this setting I highly recommend you pick it up and get to reading!