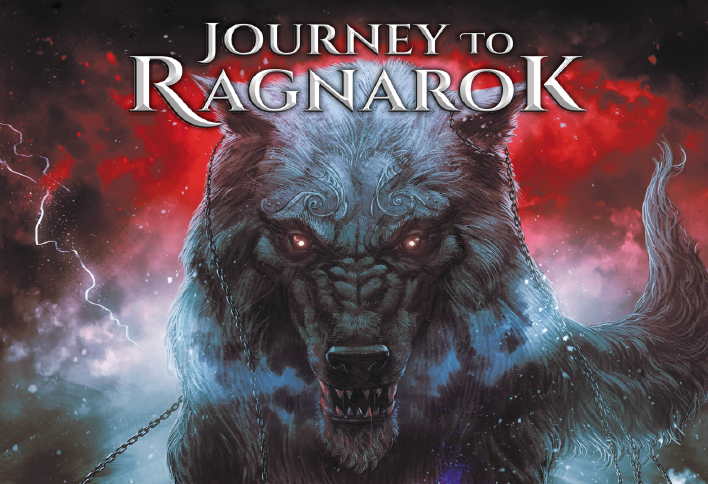 I’ve been eyeing Journey to Ragnarok by Mana Project Studio for some time. With all the games on my shelves already waiting for more time and an ongoing and firmly-established Adventures in Middle-earth campaign underway I just couldn’t justify it. The reviews and reaction, though, have kept this product firmly in my mind and I recently used up some of my earned credit to purchase it. Let’s see what’s inside!

I’ll start on a somewhat prickly note to say that the editing in this book is… lacking. There are so many typos and weird formatting issues that it’s a little distracting. I’m not going to mention that in this review, though, as I think the content can be evaluated without worrying too much about the words. At the end of the day, Journey to Ragnarok is an ambitious and epic setting-and-campaign combination that will surely have people’s imaginations going. Like Trudvang and the northern portions of Early Dark, this setting cleaves closely to historical realities of Norse culture without bothering to set it in the actual real world. Sure there’s a Jutland mentioned and plenty of Old Norse terms thrown around but whether sailing south will take you to Italy or just a southern foreign land is up to you.

I’m going to focus in this first part on why I think most people would consider this book. Between the DM’s Guild and the many campaigns out of Wizards there’s so much to keep your 5e group busy. What Journey to Ragnarok offers is an alternative take on D&D that firmly puts it in the Norse mythos.

After a discussion of the Nine Worlds of Scandinavian mythology (which I won’t get into here, but it does have some new angles I hadn’t heard before), Journey to Ragnarok gets into ways to make D&D 5e feel different in this setting. Some of them, such as how to handle death and a new skill of Asatru (an Icelandic term for “allegiance to the Æsir”), are pretty vague and almost certain to lead to some arbitration from the GM. Others, though, are really cool and exciting.

One that I’m pretty intrigued by is an alternate alignment system for Journey to Ragnarok, and not the usual sort of reworking. I’ve seen alternatives that involve using characteristics or labels (Adventures in Middle-earth, for example, relies on the corruption-tracking Shadow points and even the DMG has an Honor system) but this one keeps the familiar two-axis model and just switches it to something more appropriate. There’s still a Law vs. Chaos axis but instead of Good and Evil the characters here are Honorable vs. Dishonorable (according to the Nine Noble Virtues from the Poetic Edda). There are some holes since the sections on this are rather short but I’m already thinking of for lots of different settings so watch for that in a future post.

Another part I like is the Option Rule on magic in the Nine Worlds which is very reminiscent of how magic was affected on various planes in Planescape back in the day. You can do it by school of magic or damage type but it’s pretty straightforward with effects being Altered (aesthetically), Augmented, Diminished, or Unaltered. It’s simple but very much in line with the 5e model and it’s a great source of inspiration or anyone wanting magic affected by location (including anyone looking to run Planescape 5e).

There are a dozen different subclasses found in Journey to Ragnarok and they’re not all barbarian paths! In fact, there’s only one barbarian path and (mostly) one for each of the other classes in the Player’s Handbook.

In addition to all of these, there’s a brand new class presented here! The Rune Master is an arcane spellcasting class with the same spell progression as the wizard (though fewer cantrips for reasons you’ll see in a bit) but a focus on ritual and planning ahead. They can create a circle of Futhark runes, for example, that makes an area more deadly for attacking enemies and the ability to paint runes on your allies to give them ongoing benefits. You even get to swap out cantrips (a unique option) though that’s not exactly even with the low number you permanently know. It’s an interesting twist since now we have an option beyond wizard on the Improvisation vs. Planning spectrum of arcane casters. The subclass archetypes, “Ætt,” involve specializing in runes devoted to a god (Heimdallr, Freyja, or Tyr) that provide additional spells and inscribing abilities.

Since the expectation in Journey to Ragnarok is that you’ll be playing a human, the setting includes six Clans which can color your particular strain of human. It’s actually a little unclear how and whether you should include other races like dwarves and elves (those two in particular are found later in the book but only as NPCs) but maybe that’s just another area for your table to decide. In the book Clans come before Classes (since it’s part of picking your race) but I thought people would like to see some mechanics first. See, there’s actually no mechanical effect for your Clan, it’s purely narrative. This is just fine but I think people might like to see a little more.

The major Clans of the setting are the Gjallarhorn and Odhinn’s Eye, the descendants of kings and the descendants of Odhinn respectively. Between the two of them, they control most of the North, ate least all the civilized bits. These are Clans in the true sense, people who are related to each other and live together in communities that are mostly their own sort. This is also true of the Wolves of the Shadow who are more of a wilderness-living, half-wild group that occupies the hinterlands (and who is sure to shine in the harsh days of Ragnarok).

Other groups are “Clans” more in the sense of brotherhood and shared values. The Bear Warriors are a martial brotherhood who are the classic berserkers of Viking legend. They technically live in their own villages but they are scattered and leaderless so they are more of a facet of the setting’s politics than a true force. Likewise, the Icy Crows are a collection of “hermits, wise seers, sorcerers and Skalds” who live throughout the north and try to maintain the old legends and proper veneration of the gods. Now, it might seem like all the Bear Warriors are going to have the barbarian class (or the Wolf Pack ranger archetype described above) and all the Icy Crows will be some sort of arcane class but that’s not necessarily true. If you want to be part of these Clans and have a non-obvious class, though, that’s on you to figure out because there’s not really any discussion here.

Lastly, the Jötunn Sons are outcasts and thieves, those who were cast out of civilized society to eke what existence they could from the swamps and wild lands of the North. They have a ramshackle encampment off in the wilderness so you’re not some half-starved wretch (unless you want to be) but you’re also not welcome in other Clans’ villages. So how do you incorporate a Jötunn Son PC into a party from other Clans? This is becoming a refrain but: you’ll have to figure that out on your own.

There are ____ different Backgrounds presented in the book, and you could presumably use ones from the Player’s Handbook though (say it with me) you’ll have to figure that out on your own. The Bondhi is landholder which is a big responsibility and comes with corresponding privilege, especially if you opt for the very prestigious Hersir variant with an estate. The Gothi is a spiritual leader (though not necessarily a priest) who oversees a community’s rituals for harvest, birth, and so on. A Huscarl is a more well-known term, a warrior pledged to one of the land’s high leaders. A Jarlr is one of the nobility who draws on his revered ancestors for personal power.

On the other end of the spectrum, a Skògarmadhr (“one who lives in the woods”) is an oucast unwelcome in society for some dark crime. Like those of the Jötunn Sons clan, it’s up to you and your group to figure out how this allows you to be part of an adventuring party. A Thrallr is an indentured slave working off some debt (maybe to another party member?) who is afforded some protection by their master. There’s also the option of being a foreign slave from the “Deep South” (meaning Europe) which gives you some knowledge of foreign lands… which seems pretty useless to me. The Vaeringi is a trader who ventures to foreign lands and so has some outsider knowledge and guild benefits from other traders. Conversely, the Vikingr also goes up rivers to foreign lands but is more interested in burning and looting than in trading, though interestingly their benefit is also support from other Vikingar.

The player-facing section winds up with some notes on equipment. A short lists labels certain items from the Player’s Handbook that are foreign and exotic in the lands of Journey to Ragnarok, and so only available at double the normal cost. There are also notes on adding short bearded axes and “assault axes” to the melee weapon options. In a tone similar to Adventures in Middle-earth there are also “Clan Heirlooms” which you can hope to be gifted with over the course of the campaign.

Using this part of the book for a Norse-style campaign of your own design (or a Norse-style region of a campaign world) would certainly save you some time. There are a ton of good options here and some excellent worldbuilding that will make you itch to create your own Clan champion or Jötunn-blooded sorcerer. There are holes, though, and it reads a little incomplete so the group will have some work ahead of them to fill in the gaps. Still, you can always just play it right off the page and figure out the fiddly bits as things go on.

Next time, I’ll take a look at the campaign itself (as spoiler-free as I can manage) with a look at how Journey to Ragnarok feels as a setting that could tell multiple stories. If you’ve played this or are also interested, let me know your thoughts in the comments!