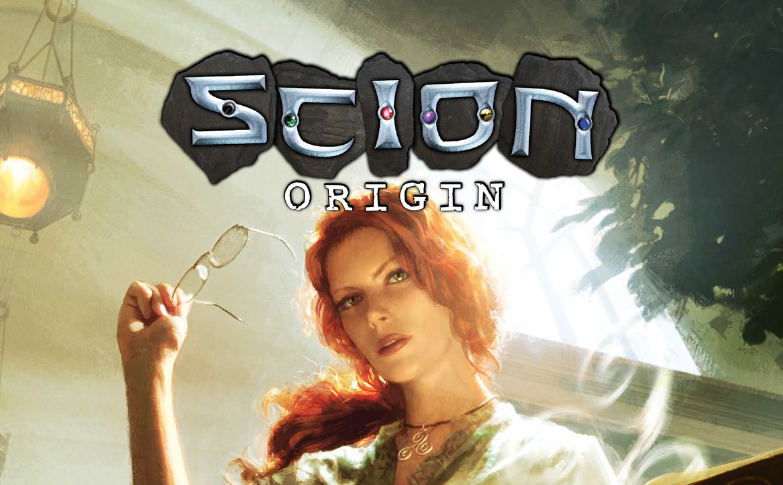 Years ago, White Wolf Publishing released Scion, an RPG about playing the children of gods with the chance to grow into a god yourself. I loved it, despite the flaws, and will heartily defend it even while acknowledging it’s issues. It’s like that friend from middle school: they were sort of a terrible person and they’ve grown up to be a person you sort of can’t stand some times but there are so many good memories that you share that you will always love them.

Now, imagine that person called you up and said that they quit drinking, started that graduate program they’ve been talking about, and want to set up a regular dinner night thing so they can actually get to know your spouse. That’s the situation with the second edition of Scion which I helped Kickstart last year. The game’s not quite ready to release but the pdfs are coming out to backers and I know a lot of people are excited about it. If that includes you, I’m here to say that your excitement will not be disappointed. Now let met tell you why.

The setting for Scion 2e is largely unchanged from the original but here’s a quick recap. All the myths and legends from around the world are true, even conflicting ones or alternate versions of the same story. Reality is flexible enough to accommodate multiple pantheons who dwell in the “otherworlds” apart from the land of mortals, the so-called “Terra Incognita.” The otherworld realms shaped by the legends and personalities of the gods who live there. Apart from the gods are legendary monsters who need to be vanquished but also the primordial Titans who warred with the gods at the dawn of time.

Right, so where do you fit in? Well, you are part god, my friend. Just a little part. It used to be that the lowest level was a mortal hero with divine parentage, someone on the level of Hercules or Cú Chulainn with superhuman powers. The second edition, though, starts with a lower level than that: just someone caught up in the mythical world of Scion but without much in the way of godly might. To quote from the character creation chapter, “Characgters in Scion: Origin can come from many backgrounds. Many are pre-Visitation Scions [who haven’t met their divine parents yet], but Legendary beings, mortal magicians, and even stranger things can take their place in the story.” I think this opens up a lot of potential but we’ll see what it actually means in a little bit.

The system for Scion 2e has received “a complete overhaul” according to some sources. Good. It was an awesome setting before but just a mess of a system. I’m not going to go into fine detail on this, mostly because it’s available for free as a preview on Drive Thru RPG. If you are interested in it, definitely pick up that pdf and check it out for a nice, succinct overview. What a good idea to get player buy-in, Onyx Path! Since I know you’re fans of this blog…

In a nutshell, here’s what’s different from the original Scion with a little overview on how things work for those new to the scene. In first edition you rolled a bunch of d10s and counted up successes, which were anything 7 or higher. In the second edition, you’re doing the same except that it’s just 8 or higher (7 gets added at higher power levels). Just like previously, the pool is built on one of your nine Attributes (split into Physical, Mental, and Social) and your Skill rating. A big shift is that, while previously you were trying to get a certain number of successes (the “Difficulty” of the task), in this edition you roll successes that are a sort of currency for doing things. This seems to owe some inspiration to 7th Sea with some other elements that channel Fate and Powered by the Apocalypse (notably City of Mist which is effectively a marriage of the two) as well as (in my opinion) the 2d20 system of Star Trek Adventures and other games.

When you roll, then, you get a bunch of successes from the dice in your pool. You can “spend” some of those to meet the task’s Difficulty and then excess ones go towards being really cool at it. You might roll Athletics + Might (for instance) to outrun the police, which the book tells us is a standard Difficulty (meaning 2). Let’s say you roll 4 successes, more than enough to meet that Difficulty. With your remaining two successes you might do a stunt to leap over a fence (providing a bonus to losing the police with another roll) or create a big scene (to distract more police if you’re trying to give your friend an opportunity). It’s much more narrative than before and freeform enough to acommodate a lot.

In the game of Scion you play some participant in the mythical world that exists along the reality we all know and “love.” In the first edition, as mentioned, there were books for three different power levels: heroes, demigods, and gods. This second edition adds the less-powerful Origins level for mortal heroes and legendary creatures. Mortals are easier to imagine, since they are similar to the sort of “toughest around” PC found in other games, but for creatures of legend you might wonder what your options are. My non-answer for you is “whatever you want.”

Characters in Scion 2e are more flexible than in the first edition so you can create the sort of character you want. In fact, there are five ready-made characters in the book (including everyone’s favorite Minnesota hipster, Eric Donner) and one of those five is Emanuel Montero, secretly the son of Xiuhtechutli. Why does that matter? Well, see Xiuhtechutli isn’t one of the gods described in the books which means the authors have (from the start!) given you an example of homebrewing your own deities and materials. Before you got mechanical bonuses from your divine parent but in this edition it’s more by pantheon, like the pantheon-specific Purviews (powers) in first edition. So making your own deity is as easy as picking out which of the general Purviews they have access to, the work of a few minutes.

But we’re getting ahead of ourselves. At the Origin level, you pick out a Path for your character, which establishes their mythical and mortal characteristics. As an Origin-level character (and at higher levels, if you’re wondering) you create three Paths, each with the following elements: a short description, three Skills associated with that Path, connections that might help you (assets, friends, followers, etc), and consequences (from a short list or made up) for when you overtax that part of your life. So, three Paths, right? Those are your Origin (backstory or upbringing), Role (your job or self-image), and Society/Pantheon (that gods, wizard circle, secret society, etc that you’re a part of). You assign these to primary, secondary, and tertiary which establishes which part of your character is dominant. If you want to play a supernatural creature, there are a series of Supernatural Origin Paths to help such as Kitsune, Wolf Warrior, or Satyr.

Enter Calling and Knacks. Your Calling is an archetype you fulfill (sort of a Joseph Campbell vibe) and there’s a specific list to pick from: Creator, Guardian, Healer, Hunter, Judge, Leader, Lover, Liminal, Sage, Trickster, and Warrior. You only get one at this level but more powerful characters can pick three archetypes (half of godhood is having a complex persona, after all). Following that there are finishing touches in the form of derived attributes, and you’re ready to go! If you’re interested in a more in-depth look at character creation, check out an upcoming post where I give an example band…

The last thing I want to talk about here is the pantheons included in this edition of Scion. There are more in this edition from a wider geographic area and getting the details “right” was probably the single most-commonly cited reason for production delays. I’m not an expert so I don’t know if the versions of each pantheon given in this book are entirely inoffensive (or, indeed, if there is any version that might exist which would be inoffensive) but they certainly seem thoughtful in their language and portrayal (and only slightly tacky in the artwork). If you have the book and a better grasp on some of these, let me know your thoughts!