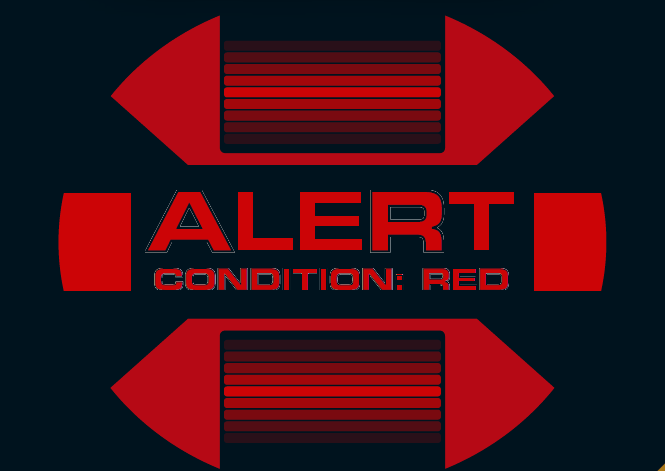 A while ago, Modiphius released a “beta version” of some rules entitled Red Alert. This is a rules supplement for the Star Trek Adventures RPG that (probably) is a preview of something they are rolling out in their upcoming Operations Division Supplement. It’s a more tactical version of the combat rules in STA and it doubles as a miniatures wargame. I’ve been interested in dissecting it for a while but haven’t had the chance. Well, today’s the day!

According to Red Alert, these rules are meant as “an exciting substitute for combat encounters in your roleplaying sessions, or a way of setting up quick combat encounters using your collection of Star Trek Adventures miniatures.” Not having any STA miniatures, I’m hoping that this will work just as well with flat tokens or online battlemaps.

Just like Star Trek Adventures, Red Alert uses pools of d20s and six-sided Challenge Dice. Combatants have the same six Attributes, the same six Disciplines, all the same Foci (though non-combat Foci understandably don’t come up much), Talents, Stress, Resistance, and weapons damage. There are Opposed Tasks, zones, and Momentum spends, although in the case of two wargamers facing off you give your opponent Momentum instead of giving the GM Threat. Your also limited in your Momentum spends to Create Opportunity, Reroll Damage, and Keep the Initiative, though the effects of these are the same as are all the Minor Actions and Tasks detailed on pages 171 to 174 of the Star Trek Adventures core rulebook.

Basically, we don’t get any new rules until page 12 of the document. Here we’re introduced to the idea of squads, something that is also seen in the Star Wars RPG from Fantasy Flight Games, various mass combat rulesets for D&D, and so on. Squads are groups of characters that act as one unit, pooling disposable characters together so that the spotlight stays on the main characters. When squads attack they roll more d20s and more Challenge Dice based on their number, simulating characters working together without actually having stats for each one. Likewise, when squads take damage that damage gets spread out through the squad and (likely) one or more of the mooks will fall, especially because squad characters only have Stress equal to their Security ratings +1.

Setting Up a Scenario

If you’re setting up a wargame scenario (or you just want to see if an encounter is balanced) you calculate Force Values for each group and see what they come to. For lone characters that’s Stress + Security, and for squads you multiply Stress times the number of models then add Security. This means, for example, that the pregen version of Commander Riker (Force Value of 18), Lt Cmdr Data (15), and Dr. Crusher (11) facing off against Gul Tremak (12), a Cardassian glinn (15), and a squad of five Cardassian soldiers (Force Value of 17… remember their reduced Stress) from the core book is a fairly even fight since the sides have Force Values of 44 and 46 respectively. Since the Cadassians have a slight advantage in Force Value, the Federation side would go first instead of rolling Initiative as normal.

These guidelines are pretty solid, I think, and they make for good balancing in the roleplaying game as well. There aren’t Challenge Ratings in Star Trek Adventures and it can be hard to gauge beforehand how deadly a fight might be. For instance, when I was originally setting up the above face-off I included Deanna Troi as well and left out the Cardassian glinn. Seemed like a fair fight to me, four on seven with some mooks, but then I crunched the numbers and found that the totals were way off. I adjusted and here we are. This is also a way to add more zip to a fight since normally trading shots back and forth can seem like it takes too long. Squads mean that someone is likely to go down with every successful attack so that the situation seems high-stakes instead of slow.

There are also icons for soft cover, hard cover, objectives, and Jefferies tubes, all of which can be handy for game maps even outside of a combat scenario. I hope the final version has more markers like this.

The included missions for Red Alert use the Starfleet Deck Tiles and are fairly rudimentary. There’s a short little description (a paragraph or two) to set the tone and then set up rules. There are special rules in some cases and then a suggested sequence to take on the missions, with branching possibilities based on outcome. The “story” is a vague plot about a Klingon diplomatic contingent aboard the Enterprise-D that picks a fight with Worf and then things escalate from there. The narrative is understandably thin but it illustrates the possibilities in this system.

For example, in the first “mission” Worf is fighting alone against three opponents but since he’s facing off against a squad it’s still a fair fight. Additionally, a few of the maps have Jefferies tube entrances marked on them, which provides the opportunity of a Clue-like flanking maneuver where you crawl through and pop out behind your opponents.

This is a solid interpretation of the Star Trek Adventures rules that allows for fast mass combat. Like the fleet engagement rules, they are close enough to the base game that you aren’t learning something totally new. They just include a few shorthand rules to make things a little faster at the table. I think this would be a fun wargame mini option while you’re waiting on players, but it would also be a great way to have some fast, dynamic combats in your Star Trek Adventures game, particularly in a military-focused campaign.

Have you tried out Red Alert? Let me know what you think!