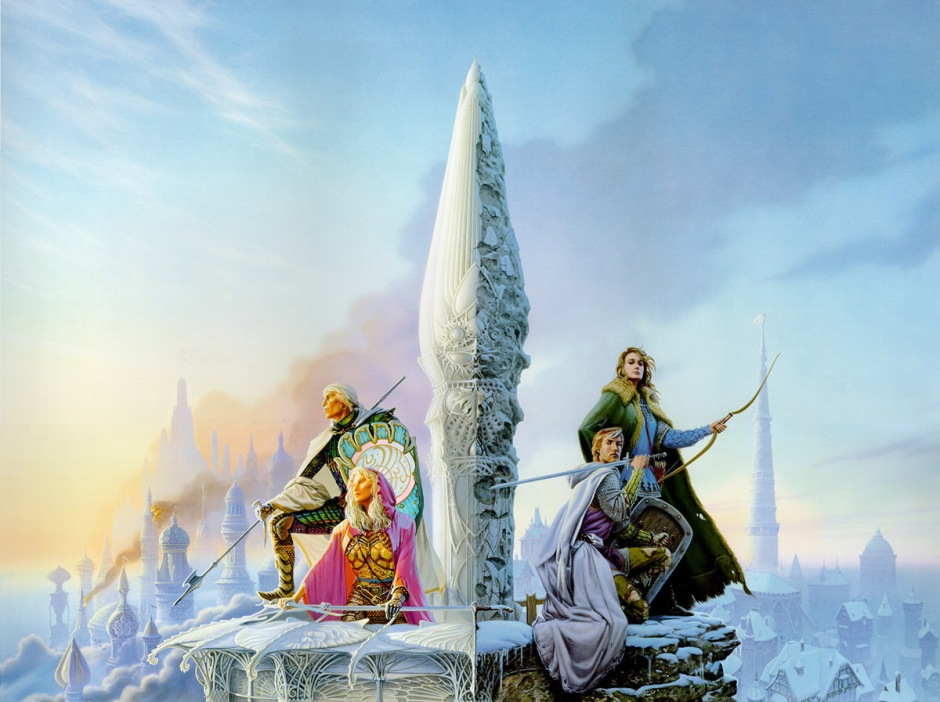 After moving and finding old books packed away on shelves, I’m rereading Memory, Sorrow, and Thorn by Tad Williams and loving it even more than when I read it in middle school. I also learned that Tad Williams has been putting out more books in the setting so now I’m even more jazzed to get back into the world of Osten Ard. What better way than to create an RPG?

What RPG to use for this? It’s hardly surprising that my first choice is A Song of Ice and Fire from Green Ronin. Even George R. R. Martin has said that the book series was an inspiration for his own series, and SIFRP has noble houses, courtly intrigues, and mass warfare. One thing it doesn’t have, though, is different races besides humans so here are two important races from Memory, Sorry, and Thorn to facilitate roleplaying in Osten Ard.

Once the Sithi ruled over Osten Ard, the tall and graceful masters of not just the forests and mountains but also with nine great cities that dazzled the minds of mortals. Millennia ago an army of Sithi, known as the Gardenborn, fled the Lost Garden of Venyha Do’sae. They enjoyed a time of golden brilliance, living peacefully alongside the humans of what would become Hernystir, until other men came with weapons forged of iron which is painful to the Sithi. They were driven from their great cities into hiding and, worse, some of their number were corrupted and twisted into a race of pale and evil creatures known as the Hidea’ya (or “Norns” in the languages of men). Today they live in the deep forests and far corners of Osten Ard, hiding and hoping to avoid notice so that they are not killed by the superstitious humans.

The Nine Cities of the Sithi are Asu’a (now ruins under the Hayholt), Da’ai Chikiza (in the heart of the Aldheorte Forest), Enki-e-Shao’saye (in the southern Aldheorte), Nakkiga (ruins held by the Norns), Kementari (near Warinsten Island), and Tumat’ai (buried under the ice of the far north) as well as Hikihikayo, Mesutu’a, and Jhiná T’seneí which are all drowned under the waves. Those underwater cities are held by the Tinukeda’ya or “Ocean Children” who were once Sithi but now live underwater.

If you choose to play a Sitha, modify your character as follows.

Few in the south have even heard of the trolls in the far north and the Rimmersmen who live nearby have done little to come to understand them. They are a short people, the size of a ten-year-old human child, with wide faces and tanned skin. They are longer-lived than humans andused to a more rustic life, which tends to make them more resourceful. While they have no history of violence with the Sithi (unlike humans) they also have no particular claim to friendship.

Their culture is strange to many humans, full of idioms and tales and lessons on the natural world, but it is generally hospitable. Many who are or off by their “heathen” ways are surprised by how honest and, well, Aedonite they can be. Still, generations of violence from their human neighbours has led them to be cautious so humans must break through a frosty attitude to reach their generosity.

The following are all Qanuc names from the Memory, Sorrow, and Thorn trilogy. Characters with these names might share the same name as characters from the books or you can use these names to create new Qanuc names. Most trolls use shorter versions of their names in everyday use, and especially among humans and close friends.

If you choose to play a Qanuc, modify your character as follows.