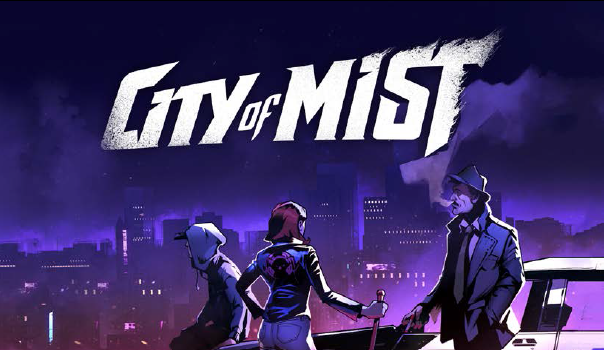 The new RPG City of Mist is part of the Powered by the Apocalypse family, a superhero game that blends the definition of the genre into high fantasy. It’s a complicated idea but I’ll get into all of that below as we start our dive head-first into Amít Moshe’s awesome game!

It’s hard to explain all the nuances of City of Mist so I’ll concentrate first on the most tangible part of the setting: the player characters. The city is a place of stories and hidden realities, veiled from the normal citizenry (the so-called Sleepers) by the titular Mists. Your character is both an urban investigator and a figure of myth, both at the same time and in complementary ways. This can be somewhat like a superhero story but it’s more than that as you weave tales to part the Mists and see the deeper truth underneath.

The first step in City of Mist is to decide what sort of story you are going to be playing, and this is done with an exposition session (same concept as a Session Zero). This isn’t the player character concepts (that comes later) but the concept for the whole campaign, in fact the book recommends that the MC doesn’t prepare any game materials in advance. They listen to the players idea but also that they participate equally in creating the narrative world. They are the final word on the game world, after all, so they provide a needed even keel for the creation process and they ask provocative questions to further the character concepts. These, of course, they mine for story hooks.

There are many different series concepts outlined in the book and many different sorts of cities to play in. The players could be casual detectives, masked vigilantes, a gang of friends, or even modern gods à la Neil Gaiman. Likewise the titular City of the game can be anything from a true noir tangle of shadowed streets to a four-color comic metropolis to the neon noir of the 80s.

Example: For this hypothetical series, I’m going envision a story inspired by the Bhagavad Gita, a war between street gangs. Characters will be similar in concept to the characters from that tale but only in broad strokes: we don’t need an Arjuna and a Krishna exactly but we should have a principled warrior, a wise friend, etc. This would let players make what they want and also gives our hypothetical MC some information already.

In City of Mists, players are portraying Rifts: people who are special and able to see through the veil that keeps the City’s inhabitants from seeing the truth. Rifts are built on four major aspects, called themes, which can be thought of as a cross between FATE aspects and D&D classes. Themes detail who your character is and they provide the powerful abilities that set you apart from others. The system, like all in the Powered by the Apocalypse family is looking for a balance between aspects and hard ratings. City of Mist says that it supports “words over numbers” but like all PbtA games there’s plenty of resource management and die modifiers to go along with those words.

The four themes for your City of Mist character fall into two categories, either Mythos or Logos. Mythos themes are about the character’s legendary self and super abilities. Logos themes are about the ordinary mask they wear among other folks in the City. Each theme has power tags (aspects of your aspects, more or less), weakness tags (the same thing but negative), and either a Mystery or an Identity (questions or conceptual ideas that move the story forward).

There’s plenty of information and advice in the Character Creation chapter to get you going, even some pre-made builds (called tropes) that can jumpstart your play. These are actually really laid out in a way that’s worth explaining. The book has lots of tropes with three themes each, and the tropes are split into Mythos and Logos. When you make a character using tropes you pick a Mythos trope and a Logos trope and then choose whether the character is going to be someone Touched (one theme from your Mythos trope and three from your Logos trope), a Borderlander (two themes from each trope), or a Legendary person (one from Logos and three from Mythos). This is a small part of the overall picture but I love that it adds an interesting element to the “pregen” option to make it something that isn’t just “the easy way out for n00bs.”

The first character did the most outlining of the story’s central conflict. Her character, named Lesya Pandev, is the daughter of a powerful Russian mafiya boss. Her father’s cousin, Blind Timur Korav, is the leader of a rival mafiya gang and Lesya has been instructed to bring their operations to a close. Lesya’s character decides to make her themes mostly Logos ones: a Defining Relationship (“Daughter of the Boss”), a Mission (“Stop the Koravs”), and Personality (“There Must Be Something Better”). Her Mythos theme will be one of strength since Lesya’s player wants her to be a powerful warrior. Lesya gets a Bastion theme (“Strength of Legend”) to represent this power.

The second player decides to rely on tropes to make an intelligent friend for Lesya, the world-wise chauffeur Harry. He picks Sun God for Harry’s Mythos trope and Getaway Driver for his Logos trope. Since Harry will be a Borderlander, he picks two themes from Sun God (the Bastion theme “Invulnerability” and the Mobility theme “Chariot”) and two from Getaway Driver (the Possession theme “Fast Car” and the Training theme “City Driving”). It might seem weird to have both “Chariot” and “Fast Car” as powers but they function differently in different scenarios as we’ll see in later posts.

The last player is playing Luciano Seta, a Portuguese hit man and the hard fist of Lesya’s mission. The player decides that he’s going to use the Mobster Logos trope (a Routine theme of “Life of Violence” and a Defining Relationship theme of “The Big Boss”) but the player decides their going to make their own Mythos themes since they don’t like any of the tropes. The first one will be an Expression theme (“Legendary Marksman”) and the second will be a Divination theme (“Farsighted”). 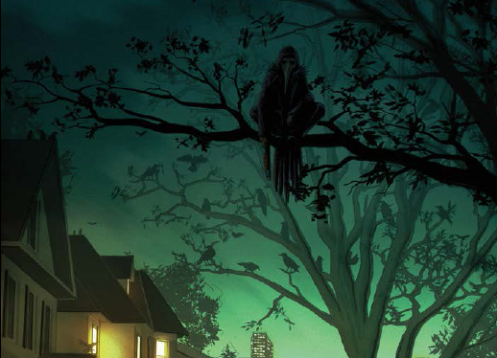 This is the process you need to start a game of City of Mists, next time I’ll be showing how this actually functions. I’ll have character sheets for Lesya, Harry, and Luciano as well as a look at how MCs are encouraged to structure cases that the player characters solve.