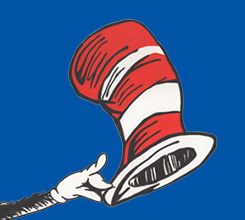 My son, Little Mephling, is obsessed with the Cat in the Hat. I’ve read it every night for a month despite several plans and sleights-of-hand so I’ve done a deep dive into the story for sure. Around the tenth repetition I realized there was something weird about the cat. He’s not your typical antagonist and his motives are a bit opaque, but I couldn’t put my finger quite on it.

And then it hit me. The Cat in the Hat is the devil.

In the story, there are two kids (and a busybody fish) who are stuck at home while their mother is out and its too rainy for outdoor fun. So, lacking imagination, they sit there and stare out the window at the rain. Then this cat bursts in, wrecks the place, releases these creatures he only calls Things, and makes a scene until the kids snap and tell him to get out. So he packs all his things up and pouts as he leaves, only to burst back in and helpfully clean up the very mess he created. Sort of a wash, right?

Well here’s the secret story underneath and why you should consider the Cat in the Hat as a model for your next in-game villain. He comes across as a bumbling clown, almost a pitiable person, but the truth is there is a strong suggestion that he’s a corruptive mastermind who has some pretty dark motivations. Consider the following lessons you could emulate in your next game.

The Cat gives the kids exactly what they want, but still does harm. It’s easy to spot a villain when they come into the story and start breaking stuff, killing people, and foiling the heroes. It’s much harder to see a villain coming when they are helpful, especially when you’re out of options like those kids staring out the window. Imagine a group of adventurers staring at a lich’s impenetrable fortress when a smiling half-elf shows up and offers a map into the secret underground tunnels with betrayal in his heart. It actually doesn’t matter if the PCs spot this villain from the start, no one will believe them! This happens in the story, actually: the fish from the beginning is saying “dudes, ditch this jerk!” (I’m paraphrasing here) but it takes forever for the kids to catch on.

The Cat keeps the naysayer busy. Let’s actually talk about that fish. As soon as the Cat arrives, the fish starts saying he’s no good so the Cat “reassures” him but grabbing him up and incorporating him into a crazy juggling act. The fish immediately starts yelling to be put down but the Cat ignores him and gets more and more acrobatic. One thing the fish isn’t doing is telling the kids to do something about this menace, and the same thing happens when the Things come out and start running around with kites. Rather than have someone constantly yelling for the villain to be arrested (whether that someone is an NPC or a player character), the villain-in-disguise brings them into things so that it all seems like part of the cover story.

The Cat leaves no evidence of his mayhem. This is the most important part and what moved me from considering the Cat as an “antagonist” and convinced me he has truly dark motivations. At the end of the story the Cat comes in and removes all signs that he was there breaking things and setting strange creatures loose in the house. This is a source of cheer for all the house’s inhabitants (including the worrying fish) but then the book ends with a moral question: the kids’ mother returns and they have to decide whether they should tell her or get away with it because there’s no evidence. Their innocence is in jeopardy and, after a month of nightly readings, I think this was the Cat’s plan all along!

What about this in a D&D campaign? It’s easy to have a villain burn a town down and then the PCs can say “See? We told you she was evil!” What if there are no signs of their nefarious acts? What are the players going to do? Alternatively, what about a scenario where the PCs find evil drow sorcerers who have a town in thrall… only they realize when they get into it that the drow are casting powerful spells to give farmers good crops, repair marriages with charm magic, and heal children. The dark elves probably have something dark in mind but they’re doing good now. Should the players put a stop to things on principle? Is that really the right thing to do? If they don’t and just leave, they’ve willingly allied themselves with evil drow. Does that mean… they’re working with the bad guys now?

2 thoughts on “Devil in a Red Hat”