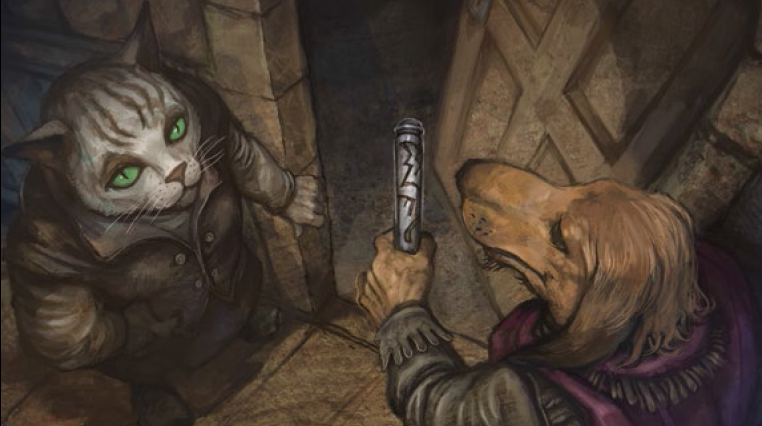 One question that I have about the currently-Kickstarting Monarchies of Mau is how the game compares to Pugmire. They are the same world so you should be able to have a joint campaign with both games, but how feasible is this? How do cat characters and dog characters compare? Are they too different to be at the same table? Are they different enough that players can feel the divide? How do they cooperate in-game? Come along and we’ll figure it out together!

Let’s start with something that both character builds have in common: callings. This is the Pugmire/Mau equivalent of classes and it represents the way that the character fits into their society as well as the adventuring party. Since dog society and cat society are very different, we can expect these callings to be different as well. At the same time, I expect to see some parallels in them too: there should be similar party roles and different corresponding social roles. Each of the pairings below have the dog calling and then the cat calling.

Artisans vs. Mancers: These two magic-wielding callings are nearly identical stat-wise with a few small changes. Both have Intelligence as a primary ability but artisan dogs favor Charisma while mancer cats favor Wisdom. More importantly, the Focus Magic trick of the artisan is more of a classic hedge wizard with spells that channel the will into an elemental ray or allowing them to smell magic. The mancer (which, if you were wondering, comes from “necromancer”) has chill paw and eldritch blast. Simply put, the dog mage is a sorcerer and the cat mage is a specialist wizard. They work pretty similarly but the flavor and spell options are different. Thematically, they are pretty similar: characters obsessed with magic and the legacy of Man.

Guardians vs. Champions: These fighter-analog callings are pretty identical right down to the skill lists and tricks/secrets (the game’s equivalent of feats). Surprisingly, even their societal role is the same: whether a dog or a cat the fighter character stands out in front and hits things really, really hard. I think there are probably ways that cats would be nimbler, faster fighters than dogs but maybe that’s the sort of things developed with Houses (see below).

Hunters vs. Trackers: Another case of two callings that are pretty interchangeable which is even more of a disappointment than the guardian/champion. Dogs and cats might show aggression in similar way but they definitely hunt in different ways. The hunter dogs should have armor and cooperative tactics while the tracker cats should have stealthy tricks to it. I would also love to have cats thematically explore the dark shadows in cat cities and leave the wilderness for the wanderer barn cats. That’s going to be a house rule in my game.

Ratters vs. Footpads: These two callings are mostly similar but they differ in ways that I wished the last two did. Both callings have Stamina and Skills that are the same and similar equipment as well. However, ratter dogs have Constitution and Dexterity as their primary abilities and Second Wind as a trick option. On the other hand, footpad cats have Intelligence and Dexterity as primary abilities and Expertise instead. This are slight changes that wind up with large differences down the line: ratters are tough and scrappy rogues whereas footpads are crafty and skilled thieves. Nice.

Shepherds vs. Ministers: This pairing is the opposite of most those in this list. Thematically the two are pretty similar, the spiritual guides of their species that adheres to the particular code of their people and keeps everyone healthy, body and mind. Mechanically, though, they are very different. Ministers are not as tough as shepherds (staying in the city instead of visiting the towns?) and shepherds are not as knowledgeable on general topics. Similar players will be attracted to both callings but the ministers are the cultural puppetmasters of their society while the shepherds are the kindhearted protectors of theirs. Incidentally, this is a nice summation of dogs and cats generally.

Strays vs. Wanderers: Another contrast in differences here, both of these callings are outsiders and frontier-livers but they approach it in very different ways mechanically. I could go over it in detail but here’s the upshot: stray dogs are barbarians and wanderer cats are monks. You don’t have to construct them like that but they are designed to fit those roles really well. Strays are tough and strong while wanderers are lithe and fast. Who would have thought that the two “catch-all” callings would have been the most different?

Both of these character aspects fill the same mechanical function in both games, similar to race in other d20 fantasy games but not quite the same. Because it would be insane to write up every breed of cat or dog (not to mention horribly repetitive) they are grouped together into large categories that get the same abilities. This lets you pick exactly the type of animal you want (important if you want to recreate your family pet as a hero in the game) without making the book a solid brick of breed after breed.

The breeds of Pugmire are: companions (lap dogs like pugs and chihuahuas), fettles (solid guard dogs like mastiffs and bulldogs), herders (shepherding dogs like collies and corgis), pointers (hunting dogs like bloodhounds and labradors), runners (fast dugs like afghans and greyhounds), workers (strong labor dogs like huskies and chows), and mutts (get your parents to explain this one).

Cat houses are sort of like this but narratively they are related families that founded the nation of cats after the titular monarchies of Mau nearly destroyed each other in war. Those houses are actually not directly mapped to breed since “cats can and do change allegiances” which makes them different from dogs. Your character’s last name is still your cat’s breed (like Lesley Persian or Trey Maine-Coon) but they add on their house when speaking formally (Lesley Persian von Rex or Trey Maine-Coon von Korat). The houses in Monarchies of Mau are: House Angora (scholars), House Cymric (diplomats), House Korat (soldiers), House Mau (leaders), House Rex (explorers and outsiders), House Siberian (medics), and the Shadow Bloc (minor houses and wild cards).

These houses and breeds map together in some cases as the scholarly types (companions and House Angora), the warriors (fettles and House Korat), fast types (runners and House Rex), supportive types (herders and House Siberian), and open-ended outsiders (mutts and the Shadow Bloc). The others (pointers, workers, House Mau, and House Cymric) are different sorts so it isn’t just a rehashing of the same thing. In a mixed game, this means that players don’t have to be stuck with a cat or dog to fill a certain role since the core archetypes (knowledgeable, combative, and healer… otherwise known as mage, warrior, and cleric) have options in both camps, and the open-ended can be crafted as well. They also can pick something uniquely feline or uniquely canine if they like as well.

Backgrounds in these games fill the same sort of role as backgrounds in D&D 5e, adding some flavor to personalize your character beyond the intersection of class (calling) and race (breed/house). Backgrounds provide some skills and some equipment and both games have essentially the same list: acolyte/disciple, common folk, criminal, merchant, noble, outsider (though the dogs call them free dogs), scholar (though the cats call them sages), and soldier. Inexplicably, though, the cat backgrounds have no associated secrets to match the dogs’ tricks. This is because cat houses provide two secrets while dog breeds provide only one trick. Following me still? Good.

So the question we started with was “Can you play Pugmire and Monarchies of Mau in the same game?” My assessment is definitely yes. It won’t be like a party of the same characters just with different sorts of faces since there are options in each game that you just don’t get in the other. At the same time, the underlying rule systems are the same and there’s a lot of overlap in character generation so you won’t feel like you’re running two games in parallel. I’m not going to rush to do it but when the final version of Monarchies of Mau comes out this is definitely on my list of campaigns to run.

One thought on “Cats and Dogs”