After reading through The Bridges We Burn, I was eager to look at Janek Seilicki’s newest scenario: A Breath of Fresh Air. It’s a strange mix of D&D tropes and bizarre sci-fi, much like Numenera itself, that provides a great plot for a gaming group through one session or beyond.

Disclaimer: The product’s author, Janek Seilicki, has once more been kind enough to give me a free copy of his adventure for review purposes. I have no other investment into this product, though, so take that as you will.

A Breath of Fresh Air is a shorter product than The Bridges We Burn, a single adventure as opposed to a campaign, and it’s for Tier 2 characters rather than Tier 3. However, the lower power level and smaller page count do not mean there is any less imagination packed into these pages. It takes place in some kingdom of the Steadfast (GM’s call) where a Rift delves into the ground with strange and otherworldly growing in its depths. In any other setting this would probably be a major site but in the Ninth World otherworldly rifts are just part of the landscape.

The themes of this adventure include dark legacies and survival: the group is dealing with the mess left by a group of mad nanos and they are venturing into a realm where the odds are stacked against them. In some ways this is a classic dungeon delve with heroes venturing into the depths of the earth where monsters dwell in their strange lair. As always with the Ninth World, however, things are not always what they seem and there are as many connections to Alien and The Descent as there are to Rage of Demons.

Depending on your group’s speed you can probably finish this up in a single session but two will definitely get it done unless the GM adds a bunch of side stories. That said, this is a great entry point into a whole subterranean plotline and A Breath of Fresh Air could easily be the first part of a longer series if you want it to be. 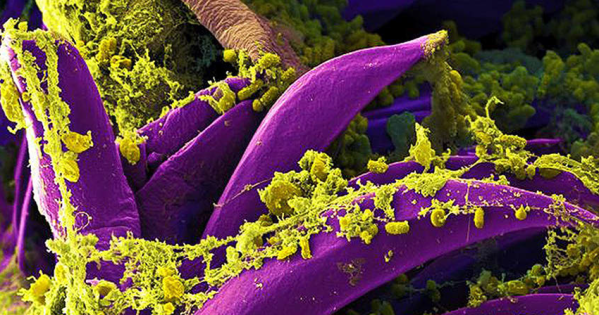 The Rift is an ancient site with a nasty reputation that a group of “mad scientists, wizards, and prophets” called the Cabal ventured into long ago. These have no connection to the Cabal of Whispers described in Character Options 2 for Numenera but if I were to run this for my gaming group tying this Cabal to that group of excommunicated Aeon Priests would be my first move.

Before the group’s grand scheme of world domination could be launched, a traitor among them named Roh’dak-tun turned on the Cabal in order to protect the slave-race of fungus-creatures he had made that he didn’t want to see destroyed in the Cabal’s war. So he killed the others, melded with the fungus colony, and the whole plan faded away as the fungus festered and the secret weapon waited. A fantastic set-up for adventure. 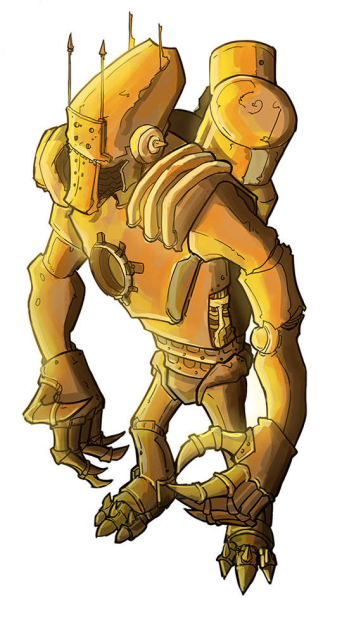 The party needs to first be in the vicinity of the Rift (the adventure provides some suggestions) and they find a hexagonal plate left by the Cabal to summon up their doomsday weapon. More on that later… Once activated, the plate starts to count down and then summons up horrible, insectile monsters called Badooks that threaten to overwhelm the characters with sheer numbers. Luckily, salvation shows up just in time. Unluckily, it is in the form of a massive colossus creature with space inside to hide.

Once the characters are in the colossus (again, more on that later) it begins to climb down into the Rift in a bone-jarring descent. Once at the bottom, the party has a chance to explore the giant war-machine they rode down in and the fungoid growth that surrounds them. The fungus colony seems to be growing over the top of the infrastructure left by the Cabal and there are enough areas to explore freely as the characters’ interest permits. Plus, there are lava pools and cascades of molten rock so… that’s fun too!

The party stays down there for a while, trying to figure out how to get out, and probably makes contact with the sentient fungoids. They might be interested to see that the fungoids die off every day and new ones are created with the hivemind’s memories. Amidst these strange surroundings they can try to repair and repurpose the automaton, build their own machine, or do something else. Let’s face it, they’ll probably do something else since players are the worst.

Tools for the GM

This adventure is an excellent way to showcase the weirdness of the Ninth World. The fungoids “speak” in  a spore language that conveys mixes of emotions (there’s a guide providing a two full pages of emotional terms to use) which means you get to make every conversation into a riddle. There is a great map that shows the fungoid colony, lava-filled cavern, and sectioned automaton, as well as helpful sidebars on topics that are likely to come up (such as food and water, talking to the remnants of Roh’dak-tun, and reskinning creatures) to make GMing this scenario easier.

I also appreciate the exploratory nature of the cavern and automaton. Though this scenario is broken up into six sections, it can really be thought of in three parts: freeform getting to the Rift, a wild scenario of panic where characters wind up at the bottom of the Rift, and then another freeform section as they figure out how to exit. This is an opportunity to make the scenario your own and the options are outlined nicely. 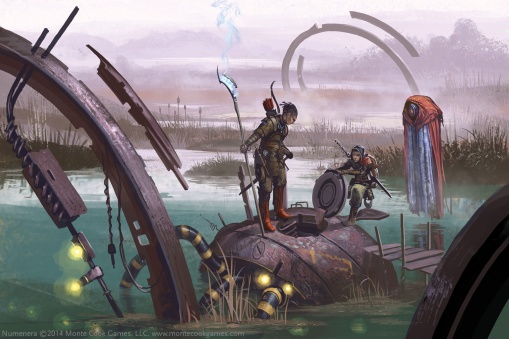 It may seem odd after I just talked about the freeform aspects of this scenario but the weakest parts of A Breath of Fresh Air are the railroading parts. Once the characters are at the bottom of the Rift, the scenario can unfold as the GM and players want it to… But first they need to get to the bottom.

I don’t know about your players, but the hexagonal plate that summons the Badooks and the automaton would set off all sorts of warning bells. They might be willing to go along with things or inexperienced enough to just start pressing buttons. Most players, though, will take one look at this hexagonal plate and say “well that’s definitely bad news!” before moving on, which means the whole plot grinds to a halt. If I were running this, I’d definitely need to spend a long time figuring out how to make this seem like less of a tripwire so that the players might actually trigger it.

Likewise, the next step of the adventure requires players to run into the automaton to escape the Badook swarm. You can make this as enticing as you want to get them to do that but offering the players a deus ex machina (machina ex deo?) to sweep them into parts unknown for adventure is the definition of railroading. If your players particularly hate this device you might get pushback from them. Unlike the hexagonal plate, there’s little chance they won’t take this chance to escape certain death but they might be resentful.

There’s also the perpetual problem of teleportation. If your players’ characters can teleport, fly, step through time, or otherwise hop out of the Rift without exploring then you don’t have much of a plot. The scenario advises you take a look at abilities and items that can circumvent things and avoid giving those out, but if the characters already have them then there’s not much to do. 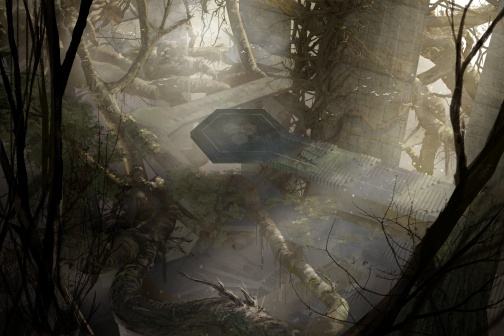 This is a great scenario that offers a lot of chances for players to immerse themselves in the Ninth World. It’s also an imaginative story which, in the style I’m coming to expect from Janek Seilicki, blends familiar tropes and new details into a compelling narrative. It does have some problems with the beginning but experienced GMs can rewrite things to better fit their player’s expectations and tendencies, besides which if you just use the material regarding the inside of the Rift itself you still have more than seventeen pages of material to use in your campaign.

I recommend this scenario for beginning GMs and/or beginning players and appreciate the attention to detail and the GM help that the author has provided. Check it out and make your fungoid BFFs today!

One thought on “A Breath of Fresh Air”