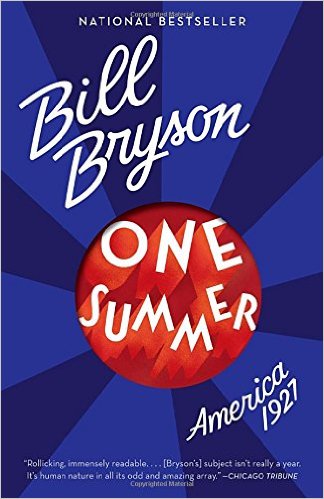 I’ve been a big fan of Bill Bryson for years, ever since I read his amazing A Walk In the Woods in middle school. He’s hilarious and interesting and he makes topics that would otherwise be very dry (from the history of English to a drive through the American Midwest) into page-turners. One of his latest book is One Summer, the story of June, July, and August 1927 in America, and it’s not only a great read but it’s a resource waiting for your early-twentieth-century campaign.

Whether you’re running a Call of Cthulhu campaign (including Achtung! Cthulhu), the WWII superhero game Godlike, the pulp adventure game Spirit of the Century, or something farther afield like Under the Table or d20 Past, this book will provide plenty of cultural touchstones and color for your game. It’s really impossible to briefly summarize what happens in this action-packed summer so I’ll let Mr. Bryson take his best stab at it from the end of the book.

So it is perhaps worth pausing for a moment to remember just some of the things that happened that summer: Babe Ruth hit sixty home runs. The Federal Reserve made the mistake that precipitated the stock market crash. Al Capone enjoyed his last summer of eminence. The Jazz Singer was filmed. Television was created. Radio came of age. Sacco and Vanzetti were executed. President Coolidge chose not to run. Work began on Mount Rushmore. The Mississippi flooded as it never had before. A madman in Michigan blew up a school and killed forty-four people in the worst slaughter of children in American history. Henry Ford stopped making the Model T and promised to stop insulting Jews. And a kid from Minnesota flew across an ocean and captivated the planet in a way it had never been captivated before.

Whatever else it was, it was one hell of a summer.

All of these things and more are covered in the book, meaning you can create plot hooks and background color for your characters. For instance…

Of course, these events are covered in any number of history books as well. So why is this book so special? In a nutshell, it’s readable. If you pick up this book you’ll be laughing, gasping, sharing with your friends, and staying up late reading. Maybe you’re the sort of person who does that with history books as well (I have on occasion) but this book is exceptionally readable and fun. You’ll get through it quickly and come out the other side with dozens of potential plot hooks and details for your 1920s or 1930s game.