I’ve been (belatedly) listening to the One Shot Podcast‘s episodes of Numenera and it inspired me to create a new Session Zero contribution. Like my last outline, this is an active Session Zero which combines the first narrative bit of the story with creating characters for an extended campaign.

Numenera (and the Cypher System generally) is particularly well-suited for an active Session Zero since character creation is so quick and so narrative. The setting for the session will be a party, by which I mean any sort of social gathering where the PCs can mingle with lots of other peoples. Depending on your style and your group this might in reality be a marketplace, pit fight, religious gathering, or some other large event. I’ll do my best to keep things general but I’ll keep referring to the event as “the party” to keep it easy.

Note: The top photo is by Fil Kearny for Metal Weave Games. Their products are a great source for background details that you can use to immerse players in the Ninth World quickly.

The first thing to determine is who exactly we’re dealing with here. Players should come up with what to call their characters. The easiest option is to come up with names but if some players aren’t ready for that they can give a title or some other identifier.

Coming to the party are Inara, Qaster, and the Shroud.

Next, choose the character type. This is the core of the character’s abilities so you want to get it done early. No need to pick abilities at this point, though, but you should have players assign points to their Stat pools. To facilitate them thinking about their characters, describe a few different areas of the party and ask where the players think their characters are hanging out. Options include…

Inara is in the middle of a loud and laughter-filled conversation making fun of some of the party-goers. She’s a glint and is actively building relationships here. Qaster, a nano, was looking at the large numenera device in the main room but now he’s hiding out in the quiet garden outside. The Shroud is still looking at the device, however, trying to see if there’s a way he can steal it or at least copy it. His player goes back and forth but eventually decides on a seeker over a jack.

Once the players have decided what sort of character they are playing, it’s time to establish their personalities a bit. Throw in some large personalities in the party, a new one in each of the party’s areas. If two players picked the same area, try to avoid them actually interacting with each other: that comes later and you don’t want to tip your hand too early. Once there’s an NPC for each player to react to, have them pick a descriptor and ask what the character makes of this person.

In the group that Inara is chatting with, there’s on particularly brash man who is hitting on her in a very clumsy way. Her player decides she is Inquisitive (from Character Options) and that she laughs along with this buffoon while secretly trying to read him and inwardly cringing.

Qaster is enjoying his peace an quiet on the roof when a drunken couple shows up and ruins his quiet. His player knows right away that this would annoy the nano and since he’s thinking of Rugged for his descriptor he describes Qaster  suddenly looming out of the shadows like some strange hillman. The couple squeaks and disappears.

The Shroud is, logically, a Stealthy Seeker so when a scholar shows up to eagerly examine the numenera alongside the Shroud, his player decides that he surreptitiously picks the man’s pocket to see if he has any useful devices on him.

Now that your players have told you who their characters are and what they do it’s time to decide how they do that thing. Come up with some action the character needs to take, either with the environment or with the personality they just interacted with. The interactions earlier didn’t really require dice rolling so this might be the first time your players pick up a d20 this session. Even if it isn’t, be sure you talk through the process of how you decide the level of the task and how that translates into a difficulty. You can, of course, skip this is your players already know Cypher.

Inara decides she’s had enough of this idiot’s excuse for flirting and tries to brush him off on someone else. Her player selects Commands Mental Powers as Inara’s focus so she says she’s going to establish a telepathic bond with another woman in the group to ask for help. Inara can freely speak to the woman and so makes her roll to convince the woman to help.

Qaster’s brusk dismissal of the drunk couple has called the attention of some of the party’s security. The GM describes two figures with imposing frames entering the garden while Qaster’s player picks out Exists Partially Out of Phase as the nano’s focus and describes him stepping through the garden wall and makes a roll to see if he can do it stealthily.

The Shroud already made a roll when he picked the other man’s pocket but he only found some useless trinkets. The man is a poseur. He decides to put it back but fails this roll and the man jerks away with an angry insult. Since the Shroud’s character has chosen Howls At the Moon as his focus he describes the seeker growling like a beast at the harsh words. The other man beats a hasty retreat. 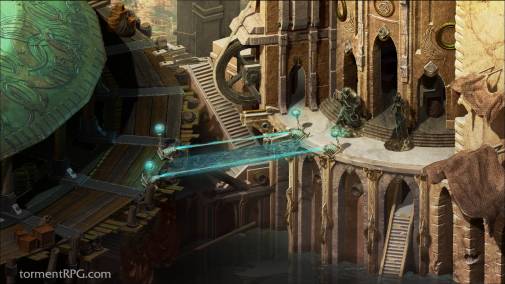 Players picked character types before but we skipped the part of picking abilities. Probably the players have been looking over their options but now is the chance for them to pick out what they want to do. Whether the last step resulted in a positive situation for the PC or a negative one it’s time to deal with the consequences. Have players pick out their abilities and then present some more action for them. This should deescalate the situation since you’re about to move on to something else next.

The woman agrees to help out Inara and she can get free. She sees someone else that she was talking to before slipping away. She decides to work quickly and one of the glint abilities she chose is Friendship which she uses to win the person over in an instant.

After escaping the security figures, Qaster finds himself in a servant’s hallway on the other side of the wall. He needs to slip back into the party before someone gets mad at him for being where he shouldn’t be. Qaster quickly uses Scan to determine that he’s alone in the hallway and to find the door back to the main party.

The Shroud now has a few other people around who are looking at him funny for his brief wolf-out. Looking for a distraction he uses Device Insight to learn more about this numenera device he’s been looking at. The GM tells him that he can interact with it by whistling a specific note and the Shroud begins to put people at ease by showing off the device’s capabilities.

The last thing to do is to create a party out of these disparate characters. This is why I mentioned avoiding direct interactions earlier in the process: we’re about to figure out how they all know each other. Create some group event like a toast by the party’s host, everyone sitting down to a meal together, or a commotion that draws attention to them. Have the characters see each other or even interact over this event and they can establish their connections as they do.

The GM says that all of these vignettes are interrupted by the ringing of a knife on glass as the host calls everyone together for a speech and to introduce dessert. Inara sees Qaster across the way and her player decides that he’s the one Inara has a mental connection with. Where have you been? she sends through the bond while keeping a straight face.

Qaster feels Inara’s disapproval through the bond and his character decides that makes him start to feel himself shifting out of phase again. His character also decides that the Shroud is the PC that helped him control his powers and that Qaster sees the Shroud in that moment and is reassured enough to get under control.

The Shroud’s character wants to keep things even so decides that Inara is the one to soothe him while in beast form. This fits with her glint abilities and her mental powers, but its invasive enough that the Shroud is uncomfortable around her in human form. He tracks from Qaster to Inara then frowns and ducks his head to listen to the speech.

At this point, you’re ready for the actual campaign. The party might introduce the action or it might be just a diversion to start things off. It might even be a flashback to a week ago right before they got that mysterious message and headed over the Black Riage to the Beyond… It’s your game so you tell me!

This party situation is a great way to introduce the weird elements of the Ninth World and to see what sort of characters are going to be in your campaign. You can use this for other Cypher games as well with few changes. If you use it for anything, though, definitely let me know how it goes!