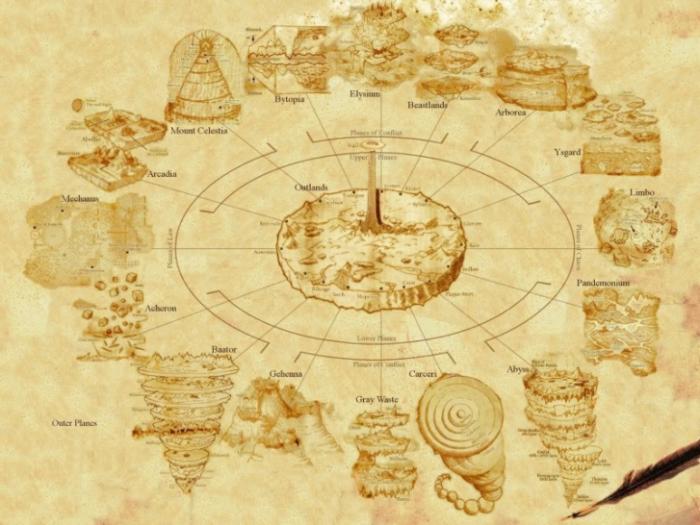 My first and greatest love in D&D is the Planescape setting by Monte and Zeb Cook. This has no small part to do with my affinity for the Cypher System, but it also means that every new edition of D&D that comes out makes me think of running a version of Planescape. Like a lot of people, I think that 4e made it difficult to have the same feel for the game. Personally, I really liked 4e and enjoyed exploring it but whatever side of the Edition Wars you ended up on you probably have seen 5e as a blast from the past in terms of game design and feel.

I’m once again going to take up the Planescape mantle to create rules for running it in 5e. This is the first part, but there will be more coming!

In Planescape, there is a big divide in characters between those who hail from the Prime Material Plane (primes) and those that don’t (planars). It’s more than just how they talk and what they’re familiar with: magic affects these people differently. Below are rules to govern the limits of how a character’s birth plane will affect them.

Most folks out here are planars, born and bred on the planes. Planars ain’t all horrible monsters or whatnot; that’s a mistake some green prime’s likely to make. Planars include all sorts of folks: humans, half-elves, githzerai, and the like, in addition to some more exotic types. One thought worthy of a prime is can’t be native to the Outer Planes. Some primes think their races are unique to the Prime Material Plane. Well, maybe that’s where humans and half-elves first came from, but these people have been living in cities and towns out here for millennia. Way back at the Beginning, humans were probably unknown out here, but with time the lost, the curious, the exiled, and the just blamed unlucky made themselves homes out here on the planes.

On the surface, it should be real easy to tell a prime from a planar, but it ain’t. A human – prime or planar – looks like a human. A body’s got to talk to them and know them to be sure what they are, which is another good reason to treat them all with respect. With others it’s pretty easy to tell; a githzerai, bariaur, or tiefling’s pretty easy to peg (but it pays to be respectful to them, too).

– From the Planescape Campaign Setting

Planars are the classic PCs of Planescape: people who are from the planes and so know the score. While prime characters are very often part of a campaign, it’s a strange Planescape group indeed that includes no planar characters and usually these games start out as a campaign on a Prime Material world and migrated to the planes…

Regardless, there are a few features that planars gain by virtue of where they were born. These should be considered racial features so anything that affects a racial feature would affect these too. Once chosen, they are with the character for life, barring some sort of divine intervention or a wish spell.

See Planar Gate: Because of the planar energies in their blood, planar characters are able to see the interplanar forces that surround portals and make them possible. If a planar character supposes that an opening might secretly be a planar gate they can inspect it for one minute and make an Investigation check (DC 15). Success means that they can tell whether or not a portal is present, though they can’t tell what the key is, whether it’s one- or two-way, or even where it goes. If a portal might somehow be hidden, the DM can increase this DC to 20.

Magic Vulnerability: A planar character is affected by any spell which might target a planar creature. If a planar character is sent back to their home plane, they reappear in a place that they have a strong emotional or ideological connection to: their home, the site of their birth, the hall of their sworn lord, etc. The following is a list of spells which affect planar characters, summoning or banishing them according to the powerful magics of wizards: banishing smite, banishment, dispel evil and good, divine word, planar ally (may summon a planar character unexpectedly), planar binding, and plane shift (can be banished). 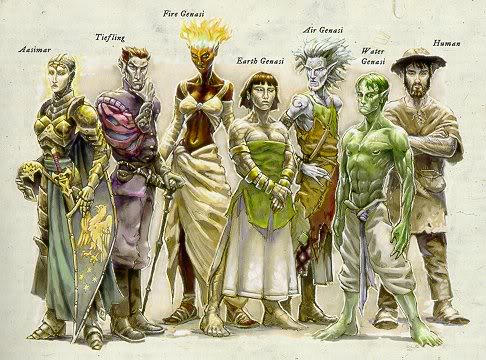 “Primes” is a polite way of naming them – more often they get called Outsiders or Clueless. Primes are mortal travelers born on any world in the Prime Material Plane who have since ventured beyond their narrow realm. They’re usually humans, elves, dwarves, and the like, but don’t be too quick to label anybody as a prime or anything else.

Most primes are just visitors who journey to the planes for some particular purpose, but some are adventuresome types who’ve set up permanent shop on the planes, most often in Sigil. A few prime settlers are found scattered about the Outer Planes (mostly in the upper reaches), and wizard primes like to make demiplanes in the Ethereal, but neither’s very common.

– From the Planescape Campaign Setting

In the simplest terms, primes are what most players in D&D are used to and the rules for planar magic don’t affect them too much. Spells like banishing smite and banishment always transport primes to a pocket dimension for the duration of the spell while spells like dispel evil and good or planar binding just don’t affect them at all. There is one way, however, that prime characters are at a disadvantage while on the planes.

Prime characters are forever bound to the Prime Material Plane and in some cases this is a vulnerability that can be targeted. Wizards, warlocks, and clerics are already familiar with the “silver cord” that connects a traveler’s astral form to their sleeping bodies when using the astral projection spell (see Player’s Handbook p. 215) but this cord is always present for prime travelers even when they are traveling bodily. This cord is is entirely invisible except on the Astral and can only be seen with powerful magic (a 7th level spell or higher).

Like the silver cord of astral projections, this cord can be cut by special items and creatures. This only happens when an effect specifically states that it does, such as with a githyanki knight’s silver sword, but unlike when a silver cord is cut by someone whose soul and body are separate, cutting a prime traveler’s silver cord does not kill them. Instead, it severs their soul’s fundamental anchor which will leave them feeling hollow and broken. This effect is identical to the bestow curse spell except that it lasts until the creature takes a long rest or until a spell that affects the soul is used such as raise dead or revivify.