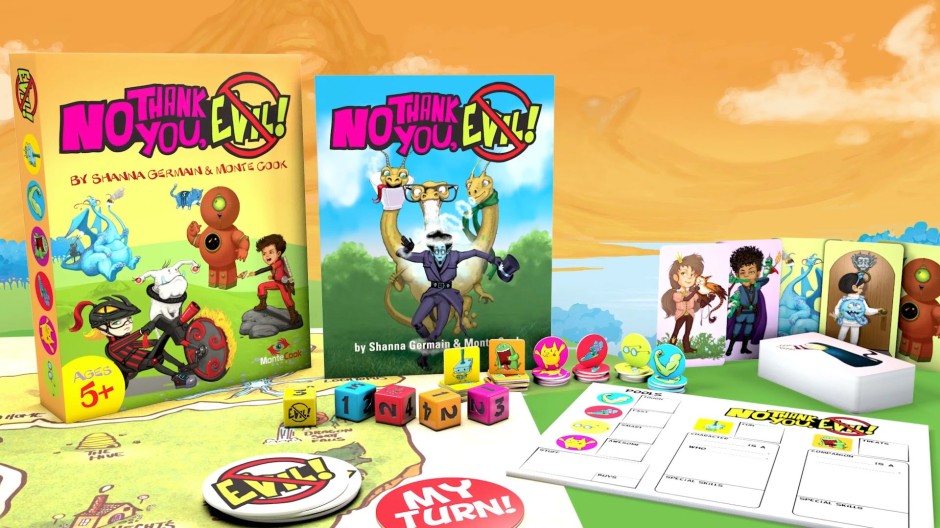 After hanging out with my son on Father’s Day last weekend, I thought I’d put some thought into games built for kids. The one I’m most excited about playing with him when he’s older is No Thank You, Evil!, a Cypher-system game for children using the same engine as Numenera and The Strange.

The structure of the game is that you use the basic building blocks of the Cypher system (“I’m a {adjective} {noun} who {verbs}”) and introduce the elements one at a time. Little kids use just the noun (“I’m a robot!”) and when they’re six or so they add the adjective (“I’m a super-fast robot!”). Eventually when they turn double-digits, they’re using the whole thing (“I’m a super-fast robot who loves ice cream!”). After that, they can just use the Cypher System Rulebook.

The book comes with ten different nouns to start off with: astronaut, creature, fighter, kid, pirate, princess/prince, robot, spy, superhero, and wizard. These all work well but the system is pared down enough and Cypher easy to manipulate enough that I thought I’d add a few other options for other interested parents out there.

If your kid has loved reading through The Hobbit or The Lord of the Rings (or if your kid is super-nerdy, The Silmarillion), they might want to play some of the characters in there.

Dwarves live underground and like gold most of all. Their families are most important to them and they often go on journeys to see relatives or to learn no stories to bring home. A dwarf is usually short and grumpy a lot of the time, but they love shiny and beautiful things.

Defense: Armor (Protects you from 1 point of damage from attacks)

Charge! (costs 1 Tough): You can run into the bad guys and shove them out of the way. When you want to knock a group of bad guys back or to the side, you succeed.

Stuff: Armor, an axe, an I Gotchyer Back pack, Hero Stuff, and 2 coins.

Dwarf Background: Choose oen of these as a background, or make up your own.

Elves are beautiful and magical, what’s not to like! They live for a very long time and have taught many things to the other peoples. They make beautiful music and live in beautiful towns.

Elf Senses (costs 1 Smart): Elves can see and hear really, really well. Whenever you use 1 Smart to look for someone or listen for sounds you automatically succeed.

Stuff: Elf clothes, an elf bow and arrows, an I Gotchyer Back pack, Hero Stuff, and 1 coin.

Elf Background: Choose one of these as a background, or make up your own. 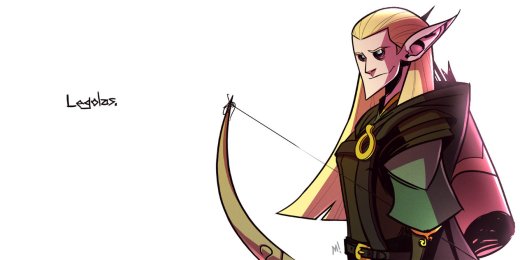 Hobbits like eating, sleeping, hanging out with friends, eating, going on nice walks, good weather, eating, fun songs, and eating. They like to be comfortable but they’re also really good at being sneaky. Bilbo Baggins, a Hobbit from the Shire, is one of the most famous sneaks in the world!

Light Feet (costs 1 Fast): Hobbits walk really softly and they can slip past people they don’t want to fight. Whenever you sneak past someone and use 1 Fast to stay quiet, you automatically succeed.

Stuff: A yummy lunch, a backup lunch, a melee weapon, an I Gotchyer Back pack, Hero Stuff, and 1 coin.

Hobbit Backgrounds: Choose one of these as a background, or make up your own:

Some kids might go for Star Wars more than Lord of the Rings. If you’re stuck on the question of what order to watch the films (in order, original trilogy first, or the novel IV-V-II-III-VI approach) I can’t help you. I can, however, provide you with some Star Wars options for your kiddos.

First of all, some things are already taken care of. Droids can be Robots, Princesses and Queens can be… well Princesses, Wookies can be Creatures, and Smugglers can be Pirates. The other options are below.

The Jedi are cool space knights who can lift things with their mind and make people forget about stuff. They hace light sabers that can cut through anything and even block lasers. The Jedi Order trains all the Jedi from the time that they’re little kids until they can be knights all on their own.

Stuff: Jedi clothing, a light sabre, an I Gotchyer Back pack, Hero Stuff, and 1 coin.

Jedi Background: Choose one of these as a background, or make up your own: 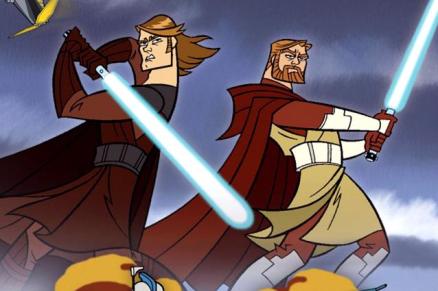 All the spaceships in the universe aren’t any good without someone to fly them, and you’re one of the best! You can fly your spaceship in all sorts of awesome maneuvers, spin circles around bigger ships, and make the Kessel Run in less than five parsecs.

Punch It! (costs 1 Smart): Your spaceship has hyperdrive which means it can go faster than even a beam of light. If you use 1 Smart you can get anywhere in Storia in the blink of an eye.

Stuff: Keys to your spaceship, pilot clothes, a melee or ranged weapon, an I Gotchyer Back pack, Hero Stuff, and 1 coin.

Pilot Background: Choose one of these as a background, or make up your own:

2 thoughts on “More Nouns for No Thank You, Evil!”